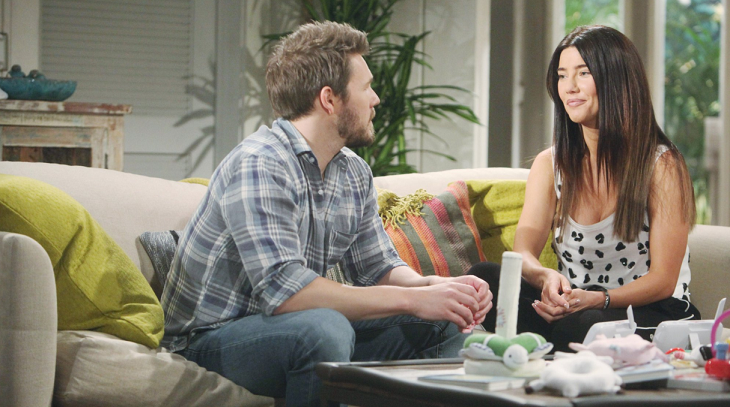 The Bold and the Beautiful (B&B) spoilers tease that Steffy Forrester (Jacqueline MacInnes Wood) and Liam Spencer (Scott Clifton) will make a shocking announcement this week.

And, the announcement throws Thomas Forrester (Matthew Atkinson) for a loop as he isn’t sure what to do about the Beth secret. Here’s what is coming up on B&B this week.

Horrified, Thomas isn’t sure what to do with this information. No matter what he does someone will get hurt. After some serious thinking, he decides to tell Steffy the truth. But when he gets to her house, Steffy and Liam make an announcement that changes everything.

Fully prepared to tell Steffy the Beth story, Thomas visits his sister at the cliff house. When he gets there, he sees Liam and Steffy taking care of the girls. He is touched how they seem to be a family.

Today on #BoldandBeautiful, Steffy makes a gracious gesture towards Liam when he reveals information about his marriage to Hope. pic.twitter.com/tD6TVLomWr

Steffy tells Thomas that she’s talked to Liam and he wants to adopt Phoebe legally. B&B spoilers state that Thomas is shocked. He isn’t sure how to respond to it because Phoebe is really Beth and Liam’s daughter.

After hearing Liam and Steffy’s announcement, Thomas decides not to reveal the truth. He tells Steffy that his news doesn’t matter today. They should celebrate the fact that Liam is making it official as Phoebe’s dad.

Steffy is all smiles and seems genuinely happy. Thomas isn’t sure how he could disrupt that. The only problem is, now every time he sees Hope sad for Beth, he knows he could end her suffering. The question is, will he eventually come clean?