The Bold and the Beautiful (B&B) spoilers tease that Wyatt Fuller (Darin Brooks) will be in for a huge surprise when he learns that his new love Flo Fulton (Katrina Bowden) is keeping a whopper of a secret from him.

Wyatt is set has his heart broken as he realizes that Flo is an even bigger liar than he thought Sally Spectra (Courtney Hope) was. Here’s what’s ahead on B&B.

Brooks thinks that the head writer’s use of bringing Flo, who is Wyatt’s first love, on the scene was genius. This is not someone he was mildly interested in. This is someone he loves and may never have gotten over. They have an established past together. They never got the chance to say goodbye. Darin assumes they lost their virginity to each other. And, now they have a second chance at that. 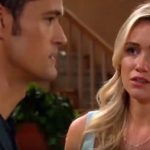 However, there is a dark cloud over them. It’s this terrible secret that Flo is keeping that could very well break them up for good.

Bold And Beautiful Spoilers– Where Does This Leave Sally?

The hard part of all this is Wyatt still loves Sally. He feels betrayed by her and he is disappointed in her. B&B spoilers tease that he may not be completely done with Sally as when the truth comes out, he will seek Sally for comfort.

Do you think Flo will listen to Xander? #BoldandBeautiful pic.twitter.com/EYLzMyyatv

The question is, will she be there for him or will she let him know she is not okay with him using her for support when he tossed her aside and eagerly got back with his high school girlfriend.

According to B&B spoilers, Darin shares that Wyatt will learn the truth about Beth soon. He cannot reveal when but it will be a shocking revelation. He will have the same dilemma that Thomas Forrester (Matthew Atkinson) has if he tells someone will be hurt. It’s a bad situation to be responsible for hurting someone.

But at the same time, it’s time for the truth to come out, too. Do you think Wyatt and Flo can move past her involvement with the Beth swap?