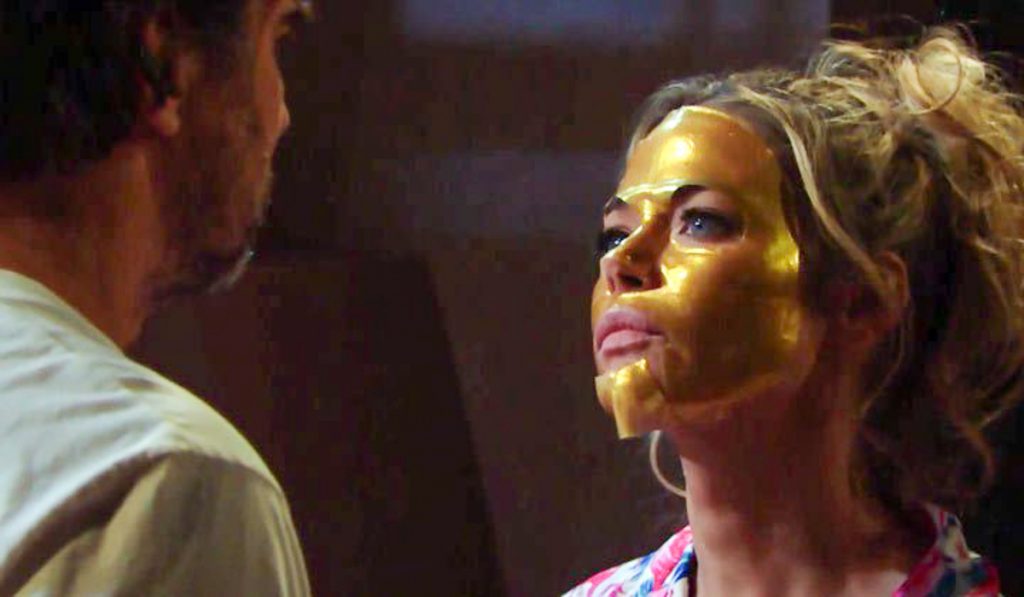 The Bold and the Beautiful spoilers tease that Ridge Forrester (Thorsten Kaye) will be feeling conflicted. As B&B viewers know, he’s been at serious odds with Brooke Forrester (Katherine Kelly Lang) for a while now, and things recently got dicey when Ridge and Thomas Forrester (Matthew Atkinson) showed up at Brooke’s mansion to retrieve Douglas Forrester (Henry Joseph Samiri). Brooke couldn’t take it that Ridge was supporting Thomas and “ripping away” Douglas from Hope Logan (Annika Noelle) and Liam Spencer (Scott Clifton), and she ended up removing her wedding rings and returning then to Ridge.

That might not have been the smartest move on Brooke’s part, given that there’s clearly another woman waiting in the wings and ready to pounce on Ridge. Shauna Fulton (Denise Richards) has been interested in Ridge for a while now, and she and Ridge are about to collide in a very big way. According to B&B spoilers, Ridge will literally bump into Shauna in the Forrester guesthouse – his new living quarters. She’ll be asleep in the bed and completely startle Ridge as he enters the room after hours. 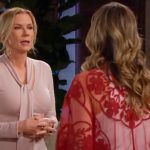 One thing will then lead to another, and the two will end up sharing a passionate kiss in the bedroom. It doesn’t look like things will go any farther than that, at least not in the physical sense. But later, at Eric Forrester (John McCook) and Quinn Forrester’s (Rena Sofer) Halloween party, Ridge and Shauna will do a little reminiscing about the kiss, so it looks like some fun flirting will ensue.

Bold And The Beautiful Spoilers: Ridge Forrester Not Physically Attracted to Shauna Fulton

Of course, we should note that Ridge may be physically attracted to Shauna, but that’s probably not the biggest draw for him to Shauna right now. He’s had an absolutely terrible time with Brooke in recent weeks, with Brooke saying horrible things about Thomas. And we can’t forget that Ridge actually witnessed her push Thomas off of a cliff, which was traumatic to say the least. He’s heard a lot of venom from Brooke, and being around her just hasn’t been pleasant at all.

And then there’s Shauna, who offers him nothing but compliments and positivity. She’s been listening to him and offering him something important – total acceptance and positive regard. Little by little, she’s been giving him what he’s been wanting from Brooke but hasn’t received or a long time. And he’s been quite receptive to Shauna’s kindness, despite the role that she played in keeping Beth Spencer’s (River Davidson and Madeline Valdez) identity a secret.

Well, soon Ridge will find himself opening up Shauna a bit more about his troubles. According to B&B spoilers, he’ll confide his problems with Brooke to Shauna over cocktails. She’ll surely be extra supportive and empathic toward him – after all, it seems to be the way to his heart right now. And she’ll probably be sure to skillfully and subtly point out all the ways that Brooke hasn’t been treating him right.

At any rate, Ridge and Shauna really seem like they’re headed for a serious affair sooner rather than later, and it’s not just the physical attraction that will lead them there. Shauna will be filling an emotional void for Ridge, and since he’s the kind of guy who pretty much needs to be involved with someone at all times, we doubt much time will go by before they are in the middle of a full-blown affair.

Do you think Ridge and Shauna will get together soon? Stay tuned to the CBS soap and don’t forget to check CDL often for the latest Bold and the Beautiful spoilers, updates, and news.