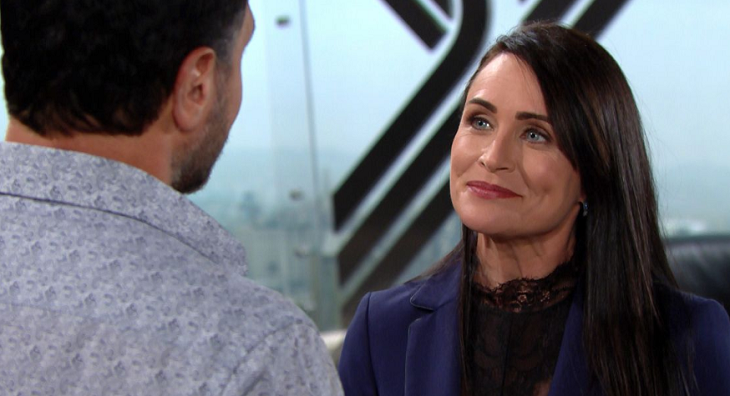 The Bold and the Beautiful (B&B) spoilers tease that Quinn Fuller (Rena Sofer) wants to meddle in her son Wyatt Fuller’s (Darin Brooks) love life again. She always seems to put her nose where it doesn’t belong and it looks like she isn’t going to change anytime soon. Here’s what you need to know about what’s ahead on B&B.

It’s no secret that Quinn wants Flo Fulton (Katrina Bowden) and Wyatt to get back together. However, there are a few obstacles standing in their way. One of the biggest ones is Wyatt’s current girlfriend, Sally Spectra (Courtney Hope).

B&B spoilers say that Sally and Quinn don’t see eye to eye on Wyatt. Quinn appreciates that Wyatt cares for Sally, but she doesn’t think they are really in love. She is sure he still loves Flo. 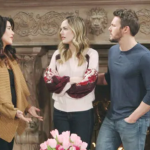 Wyatt has told his mother multiple times that he wants a life with Sally and he loves her. For whatever reason, Quinn doesn’t think he is serious. She keeps pushing the Flo card– suggesting they would make a great couple again. It’s getting to the point that it’s making Wyatt very uncomfortable.

The one newsflash that Shauna Fulton (Denise Richards) has not confessed to her best friend Quinn is Flo was part of a baby swapping scheme that left Hope Logan (Annika Noelle) childless.

B&B spoilers state that Shauna would love for her daughter to reunite with Wyatt, but it’s dangerous.

Flo’s guilt would probably prompt her to confess to Wyatt, who is close to Hope and his brother Liam Spencer (Scott Clifton). It would be a disaster. So, to prevent that, Shauna wants to block Quinn’s attempt to rekindle Wyatt and Flo’s romance.

This baby swapping bomb will eventually go off and when it does, Shauna, Flo, and Reese Buckingham (Wayne Brady) will have to answer some hard questions.

Do you think Flo and Wyatt will get back together? If so, what about Sally? Will Flo ever confess to Hope? Don’t forget to come back later for more The Bold and the Beautiful (B&B) spoilers, news, and casting updates!

The Young And The Restless Spoilers: Is Mia Going To Attack Sharon?