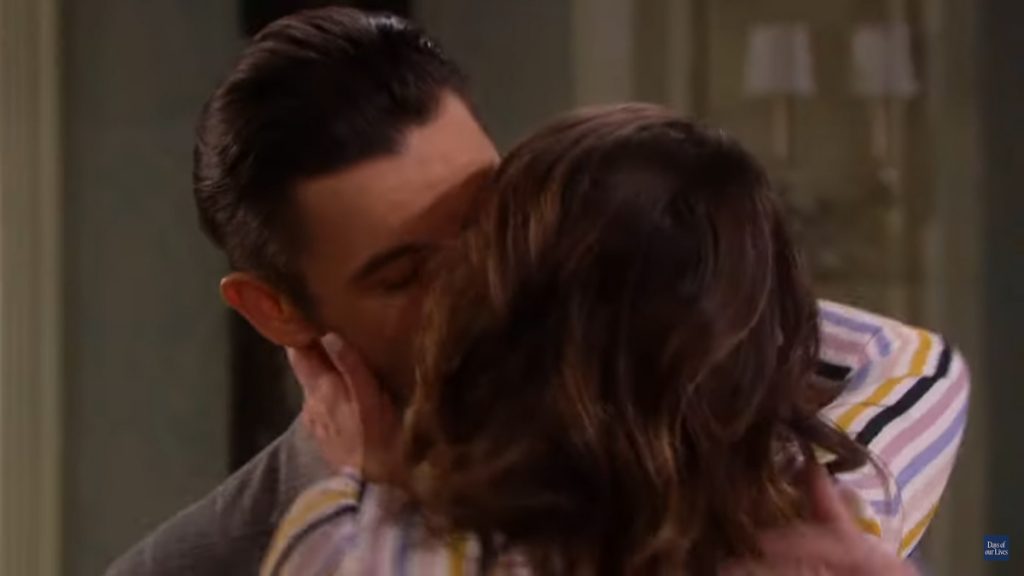 Days of our Lives spoilers for Monday, October 14 tease of another day of exciting drama and tense situations for Days of Our Lives fans!

Xander Kiriakis (Paul Telfer) enlists Dr. Wilhelm Rolf’s (William Utay) help to try and keep Sarah Horton (Linsey Godfrey) from moving away from Salem, as is her plan to keep Eric Brady (Greg Vaughn) from finding out she’s pregnant. She is worried if she stays that Eric and possibly Nicole Walker (Adrienne Zucker) will figure out that she’s pregnant with his baby as her pregnancy progresses and she begins to show.

Xander goes to Rolf possibly because he has thought up a plan to make Sarah seem farther along than she is and maybe asking Rolf if he can do anything with a serum! That way maybe Xander could claim paternity.

Anna DiMera (Leann Hunley) is blindsided by Tony DiMera’s (Thaao Penghlis) news and asks him to propose to her in Monday’s Days of Our Lives. Tony has been hired by Wei Shin (Michael Hagiwara) to run DiMera Enterprises in the absence of Kate DiMera (Lauren Koslow) and the death of Stefan DiMera (Brandon Barash).

Previously, Kate and Gabi DiMera (Camila Banus) were intending to run the company together, prior to Stefan’s death and Kate’s near death. Apparently, Mr. Shin had to find someone in a hurry and chose Tony and he accepted; Anna, however, may not like that idea too well and give Tony a choice between running DiMera and marriage to her!

Days of Our Lives Spoilers – Hope Brady Starts To Remember

Hope Brady (Kristian Alfonso) starts to remember parts of her encounter with Dr. Rolf in last Thursday’s episode when she was lured into his lab and injected in the arm with an unknown substance! Viewers will recall that Rolf also used a scalpel to implant something in her neck, possibly a mind control chip of some kind?

Hope will start to remember parts of what happened to her, but the question is, will she take it seriously and ask for medical help and talk to the Salem Police about Rolf’s shenanigans, or will she brush it off as a nightmare?

Days Of Our Lives #DOOL Spoilers: Victor Decides Both Ben And Jordan Are Too Dangerous – Plans To Kill Them Both @celebratesoaps https://t.co/btGhlmJx02

Xander will also fantasize about Monday’s episode, likely in relation to his trying to keep Sarah in town and asking Rolf’s help to do it. Xander loves Sarah and his fantasies may either be sexual, remembering their drunken night of love back in January, or he may fantasize about having her as his wife and children of their own in suburbia! Xander is realizing he wants a family who will love and accept him and not one who always demands him to prove himself!

Nicole and Eric will have a heart to heart in Monday’s episode. They may be talking about their own lives and their life together, although Sarah may come into their conversation as well. Everything seems to be a go with Xander having given Nicole the signed divorce papers, and Nicole and Eric working together at The Horton Center. What could possibly go wrong? Viewers know that Salemites should never ask that question!