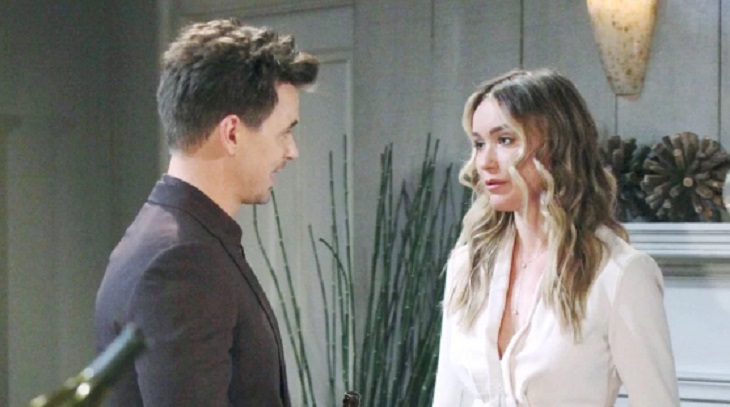 The Bold and the Beautiful spoilers indicate that the relationship between Wyatt Spencer (Darin Brooks) and Flo Fulton (Katrina Bowden) will come to an end soon.

This week, Flo’s lies are revealed when she finally confesses that Hope Logan’s (Annika Noelle) baby is alive. Everyone is going to be angry over Flo’s deceit, including her boyfriend Wyatt.

Wyatt is Liam Spencer’s (Scott Clifton) brother. For months, he watched as Liam and Hope grieved the loss of their daughter. He also had to comfort Liam when Hope divorced him. To find out that his girlfriend was involved in the baby switch is going to infuriate Wyatt.

Bold And The Beautiful Spoilers – Wyatt And Flo’s Reunion

Wyatt loved Flo and when they met up again after being apart for years, his feelings for her resurfaced. He ended his relationship with Sally Spectra (Courtney Hope) in order to rekindle his romance with Flo. He thought things would be different this time around, but it’s only going to lead to more heartache.

Learning about Flo’s lies is going to make Wyatt see her in a new light. He thought Flo was a decent person, but for her to lie about something this big is more than he could handle. There’s no way he could be with a woman who hurt his brother and his niece.

Flo will try to reason with Wyatt and make him understand her dilemma. However, Wyatt isn’t going to be so quick to forgive. She caused so much pain for his family, and she could’ve come forward sooner, but didn’t. Flo didn’t care about Hope or Liam, the only person she cared about was herself.

Bold And The Beautiful Spoilers – Wyatt Kicks Flo To The Curb

With Wyatt officially ending things with Flo, this leaves the door open for a possible reunion with Sally. Fans loved Wyatt and Sally together, and they were heartbroken when the couple split up. They were angrier when Wyatt began dating Flo.

But the question is whether Sally will be able to give Wyatt a second chance. She was hurt by him, and may need time to sort out her feelings.

As for Flo, she won’t give up on Wyatt and will do anything to hold on to her ex.