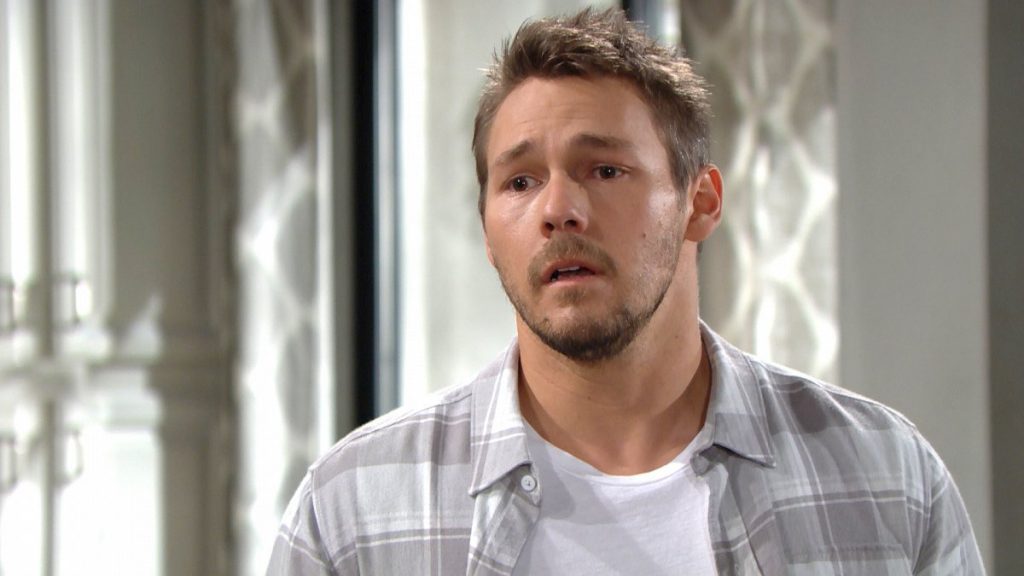 The Bold and the Beautiful recap for Thursday August 1stfinds Flo Fulton (Katrina Bowden) revealing the truth that she never gave birth to Baby Phoebe. Wyatt Spencer (Darin Brooks( is livid. Thomas Forrester (Matthew Atkinson) gets a package from his friend Vincent Walker (Joe LoCicero) with the hope that Hope Logan (Annika Noelle) will finally act like his wife.

Also, Steffy Forrester (Jacqueline MacInnes Wood) and Liam Spencer (Scott Clifton) try to figure out what to do next.

The Bold and the Beautiful Spoiler – Liam Spencer Breaks Down

It begins at the cliff house, where Steffy finds Liam crying with Baby Phoebe in his hands. She wants to know what he’s going. Liam tells her that Phoebe is Beth, but Steffy insists that it’s Phoebe. Steffy doesn’t know what’s going on but thinks that all of the stress is getting to Liam and that he might be having a breakdown.

Bold and the Beautiful Spoilers: Wednesday, July 31: Shauna Tries To Prevent Flo From Confessing – Liam Puts The Pieces Together

He then goes over how Flo never gave birth and tells Steffy that he can simply feel it that Phoebe is his daughter. The baby starts crying with Douglas Forrester (Henry Joseph Samiri) asking if everything is okay. Steffy assures the little boy that no one is mad but when he says that Beth is crying, she corrects him and says Phoebe. Steffy looks at him with disbelief.

Back in their hotel suite, Hope is once again looking at a sonogram photo of Beth. In the hallway, Vincent hands Thomas something that will hopefully help spice things up for his honeymoon. However, Hope is still thinking about Liam and the life they had when Thomas enters the room. Thomas then gives Hope something a little sexy to wear. She puts it on. He takes her phone, puts it on silent and hides it from her.

The Bold and the Beautiful News: Jacqueline MacInnes Wood Is One Hard Working Mama @celebratesoaps https://t.co/IfaAgGtJCu

Even though she regrets it, she would have never reconnected with her friends and family from the past if she hadn’t done so. Flo says that she’s sorry for lying to them but admits that she never gave birth to Phoebe.

At first Wyatt doesn’t believe her and tries to defend Flo, despite Liam telling them that he knows the truth, too. Flo then shouts at the men and says that she never had a baby and that Hope is the mother of the baby that Steffy adopted. Wyatt is livid as Liam gasps with shock. Wyatt goes off on Flo, who is nearly in tears.