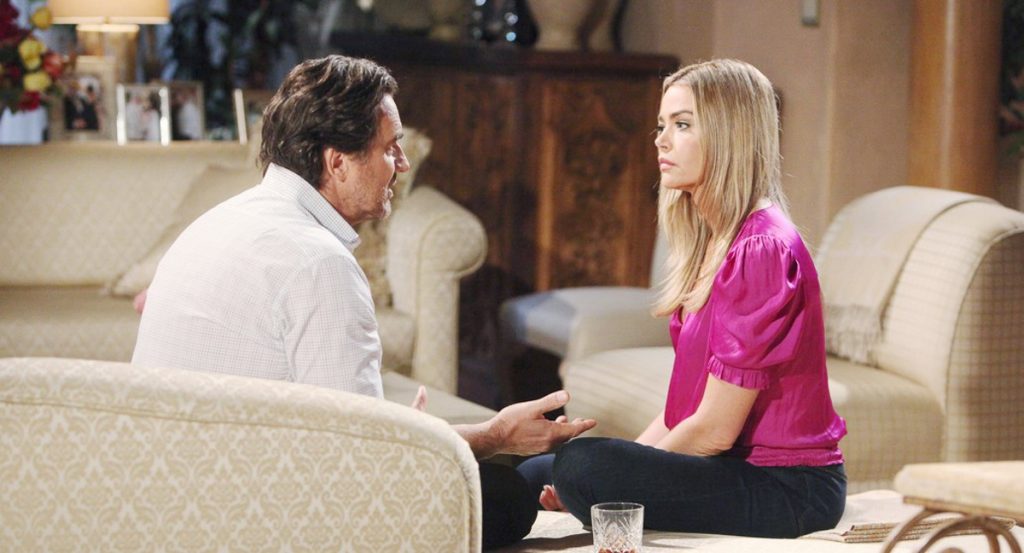 The Bold and the Beautiful spoilers for Friday, November 22, tease that Ridge Forrester (Thorsten Kaye) will get some much-needed support from Shauna Fulton (Denise Richards). As B&B viewers know, Ridge and Shauna have grown closer in recent weeks and she’s been there for him as a friend. Importantly, she’s offered him reassurance about abilities as a father to Thomas Forrester (Matthew Atkinson) at a time when he really needed to hear it.

In fact, Shauna has really provided the kind of support to Ridge that Brooke Forrester (Katherine Kelly Lang) used to provide, before they started having marital troubles. Shauna is really there for him now in a way that Brooke just can’t be, given Brooke’s strong feelings of animosity and disgust for Thomas.

The Bold and the Beautiful spoilers indicate Shauna will listen as Ridge opens up about the problems in his family. As B&B viewers know, Ridge was horrified to hear the details about how Thomas behaved toward Hope Logan (Annika Noelle) on the night that he signed the adoption papers for her. It looks like Ridge will be feeling that Thomas has really lost his way.

But it appears that Shauna will be able to offer Ridge some good counsel and get him to stop feeling so negatively about his son. She might point out that things might seem hopeless for Thomas right now, but that he has a lot of love and support that will help him get through. Ultimately, Ridge will conclude that he hasn’t really lost Thomas after all, so Shauna may give him a more optimistic viewpoint.

Of course, B&B viewers can also expect a little fun flirting between Shauna and Ridge as well. The two get along well and they’ve kissed in the past, so there’s definitely an attraction there. The two certainly have a good rapport and good chemistry together, and viewers will see more of that on Friday’s episode.

B&B Spoilers – Thomas Forrester Has Some Explaining To Do

Meanwhile, on Friday’s new episode of B&B, Thomas and Hope will get a chance to talk. As B&B viewers know, they’ve just embraced after Thomas made his presence known to Hope in her room. She was sitting there, horrified about what she thought she had done to him on the catwalk at Forrester Creations and lamenting the fact that Douglas Forrester (Henry Joseph Samiri) had lost another parent.

B&B spoilers also indicate that Thomas will have a point to prove. But what could that point be? Perhaps he wants to offer Hope forgiveness for what happened on the catwalk, or he could want to tell her that what happened wasn’t her fault. Of course, Hope will likely have a lot of questions for Thomas about where he’s been for the past 24 hours and why he chose to come back now.

The Bold and The Beautiful Spoilers: Brooke Flips When She Realizes Thomas Is Alive @celebratesoaps #BB #boldandbeautifulhttps://t.co/qp2Woo87PH

There’s probably a very good chance that Thomas has been on the grounds of the mansion for some time now, and that he has heard Hope beating herself up about what she believed happened to him. And if that’s the case, then he probably also knows that Brooke tried to persuade Hope to cover up his “death” and withhold the tragedy from Ridge and Steffy Forrester (Jacqueline MacInnes Wood).

That will surely leave Thomas quite aggravated with Brooke, and in the days to come he’ll go about getting payback on her, as he taunts her to come clean with Ridge about what she urged Hope to do. It will be a bad scene when Brooke finally does come clean with Ridge and will likely be the end of their marriage, which is exactly what Thomas will want.

The Bold and the Beautiful Spoilers: Carter Gives Ridge Legal Advice – Douglas To Remain A Forrester!