Days of Our Lives (DOOL) spoilers tease that after saving her and Tripp Dalton’s (Lucas Adams) life, pulling them out from the burning Horton cabin where they were passed out, suffering smoke inhalation, Eli Grant (Lamon Archey) will take Haley Chen (Thia Megia) into custody as an illegal immigrant, and Tripp as well for marrying her so she could get a green card in this Tuesday’s Days of Our Lives episode!

If this were the “olden days” the Salem PD “paddy wagon” would be full, because Ben Weston (Robert Scott Wilson) is also arrested after Eli spots him holding the lighter that Claire Brady (Olivia Rose Keegan) used to set the cabin on fire! However, that may not stick so well since Days of Our Lives promo pictures show Ben was smart enough to pick it up with a cloth and his fingerprints may not be found on it!

Tripp and Haley will no longer be able to outrun ICE, and JJ Deveraux (Casey Moss) is already in custody in Salem after his father Jack Deveraux (Matthew Ashford) put him under arrest for the same thing, after bargaining with JJ to let Jennifer Deveraux (Melissa Reeves) go, after she’d tried to knock some sense into him with her laptop! Jack’s family and friends are beginning to feel like he should have a new last name, starting with “A” thanks to his bad Eve-inspired behavior! 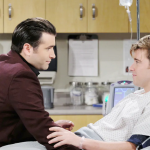 For his part, Eli probably won’t want to arrest Tripp and Haley and bring them in, especially after they could have died if he and others hadn’t gotten there in time, but legally he really has no choice.

ICE had “deputized” the Salem Police Department to bring in any illegal immigrants or others breaking immigration laws, and JJ, Haley, and Tripp all broke the law by JJ and Tripp conspiring to keep Haley in the country by Tripp marrying her so she could get a green card, JJ running off with her trying to flee to Canada, and Haley for living and working without a green card.

In the latest #DAYS, JJ and Haley prepare for their escape.https://t.co/ZsCmioRrzb pic.twitter.com/DdbhcJ3vfo