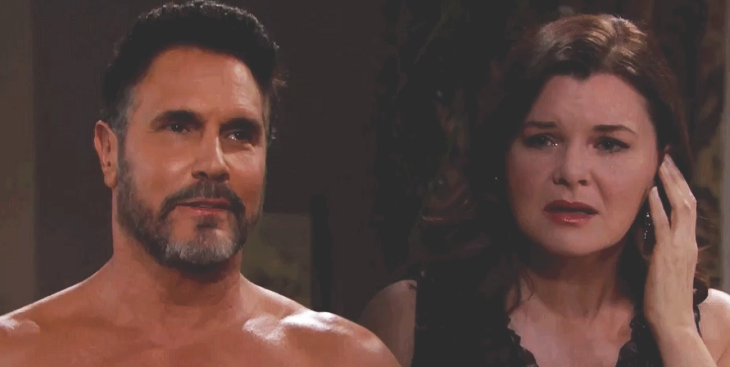 Katie Logan’s (Heather Tom) uncertainty was understandable on the Bold and the Beautiful. She wasn’t sure if Bill Spencer (Don Diamont) could be trusted. But thankfully for him, and for viewers, everything appears to be working out for the best.

Credit to B&B for creating a storyline that sharply contrasts the solidly written baby drama involving Bill’s recently born granddaughter Beth Spencer (Isabella de Armas and Rosalind Aune), who’s living as Phoebe Forrester. Of course he and many others don’t know who Phoebe actually is.

At some point, Liam Spencer (Scott Clifton) and Hope Spencer (Annika Noelle) will reclaim Beth and then rejoice, while Steffy Forrester (Jacqueline MacInnes Wood) is devastated, and Flo Fulton-Logan (Katrina Bowden) falls. But in the meantime, a sweet redemption story is being projected.

Bold And The Beautiful Spoilers – Bill Spencer A Changed Man

Skillfully writing Diamont’s character from a true lout to who he is now hasn’t been easy. Last year, Bill was shot by Taylor Hayes (Hunter Tylo), the lady who naively paid Dr. Reese Buckingham (Wayne Brady) a quarter-million dollars so her daughter, Steffy, could privately adopt Beth-Phoebe. Skipping to the now, the head of the Spencer clan is finally realizing all that he’s been working for, the reclamation of his family.

Tears of joy streamed down Katie’s face as she listened to Bill reject Shauna Fulton’s (Denise Richards) aggressive pass. As requested by the twice former Mrs. Spencer, Richards’ delightfully refreshing character poured it on. But Bill stepped back, even including a forthright explanation of his rejection.

As Bill referenced, the old Dollar Bill would have taken to Shauna instantly. But Bill passed the test, as she, Brooke (Katherine Kelly Lang) and most of all, Katie, were hoping.

Bold And The Beautiful Spoilers – Batie Now Set To Resume

Justin Barber (Aaron Spears) and his own potential restoring love, Donna Logan (Jennifer Gareis), are also glad that this family is reforming.

Bill’s proclamation of love for Katie and hope to restore his family, which includes his beloved son, Will Spencer (Finnegan George), was both truthful and heartfelt. Katie heard every word through Shauna’s purposely open speaker phone.

Smartly, Katie didn’t tell Bill why she’d decided to accept his third marriage proposal. He wasn’t seeking details, but instead was simply grateful. And with that, Batie is set to resume. Yes!

Young and The Restless Gina Tognoni Moving On, Ready For ‘Newer And Richer Experiences’