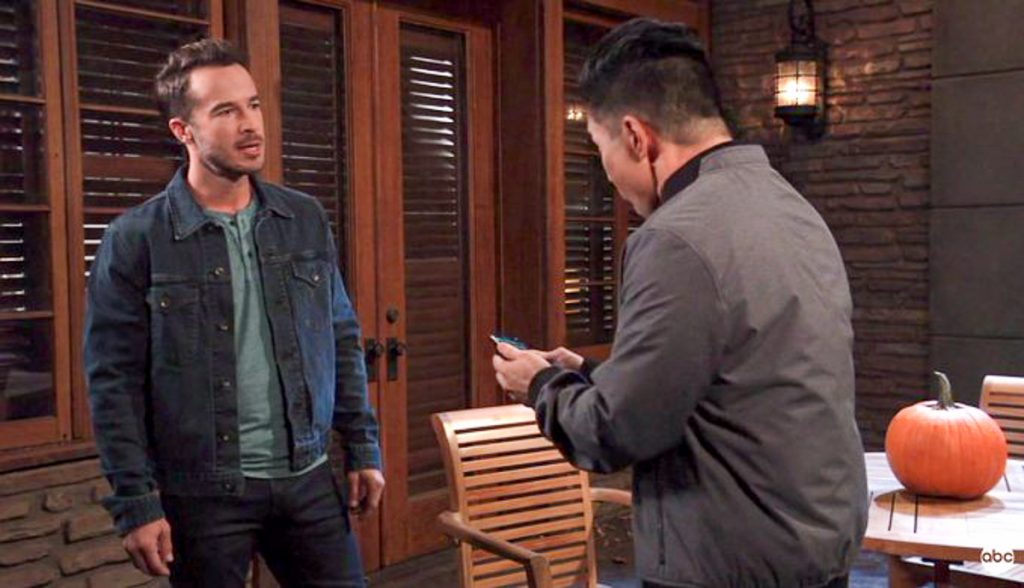 General Hospital spoilers tease that there are five key takeaways that GH fans should watch for in this week’s GH, from Monday, November 4 through Friday, November 8.

The marriage between Lucas Jones (Ryan Carnes) and Brad Cooper (Parry Shen) continues to deteriorate as the two get into the argument to end all arguments at Sonny and Carly Corinthos’ (Maurice Benard, Laura Wright) house! While Sonny and Carly are in the living room they hear nearly all of the whole argument while Brad and Lucas get heated on the deck. Lucas winds up staying the night at the Corinthos house along with Wiley Cooper-Jones (Erik and Theodore Olson) while Brad goes to Julian Jerome (William DeVry) for advice, and finds out that Julian is setting him up, which he then goes back and tells Lucas! Brad gets the upper hand!

Laura Collins, as well as some other Port Charles residents “in the know” deal with the aftermath of Ava Jerome’s (Maura West) confession that Nikolas Cassadine, (Marcus Coloma) followed her back from the Metro Court Halloween party in a hooded cloak and a mask to the art gallery and then revealed himself to her. It was such a shock to Ava that as Nikolas approached her to apparently kiss her, she passed out in his arms, which caused him to remark he would have thought she would be glad to see him! Laura and Julian convinced Ava that she hallucinated Nikolas, and took her to be rehabbed in Shadybrook. Julian will support Ava, and Jasper Jacks (Ingo Rademacher) will stop Laura from doing something, and it could be related to Nikolas’ being alive. Ava will keep quiet.

Alexis Davis’ (Nancy Lee Grahn) health will continue to deteriorate, as Dr. Hamilton Finn (Michael Easton) continues to look for a diagnosis. She will take a turn for the worse, and by the end of the week her ex-husband Julian will head to General Hospital, and it could be because she is near death. Even though Alexis and Julian had moved on from each other since their divorce, they still share a daughter, Sam McCall (Kelly Monaco) and they care about each other and look out for each other.

Meanwhile, Sam continues to struggle in Pentonville Prison, waiting on her bench trial to be assigned a date on the court calendar. Cassandra Pierce (Jessica Tuck) continues to be a threat to Sam, and she will make threats. Sam and Jason will still be brainstorming about Peter August’s (Wes Ramsey) connection to Shiloh Archer (Coby Ryan McLaughlin) although she remains in Pentonville with Cassandra as her cellmate, and Sam and Jason will be curious and Sam will have questions. Cassandra will be worried and scared so someone will get to her; and at the end of the week, Jason will get an alarming phone call!

General Hospital Spoilers: Laura Doubts Nikolas' Survival, Convinced He Would Reveal Himself To Her or Spencer @celebratesoaps #GH #generalhospitalhttps://t.co/3yoMSW9FQl

Elizabeth Baldwin (Rebecca Herbst) will cope with life without Franco Baldwin (Roger Howarth) although she will continue to believe he will eventually come back to her, she just doesn’t know how since Scott Baldwin (Kin Shriner) lost the competency case. Franco, however will have a realization, and Kim Nero (Tamara Braun) will want closure. Elizabeth will have a new houseguest when her sister, Hayden Barnes (Rebecca Budig) moves her daughter with Finn, Violet Finn (Jophielle Love) into her home. Finn, meanwhile, will not be ready to face his fiancée, Anna Devane (Finola Hughes) because of finding out not only that Hayden lied about miscarrying their child, but possibly not being sure if he wants to marry Anna or complete his family with Hayden and Violet, after Hayden told him she still loves him!