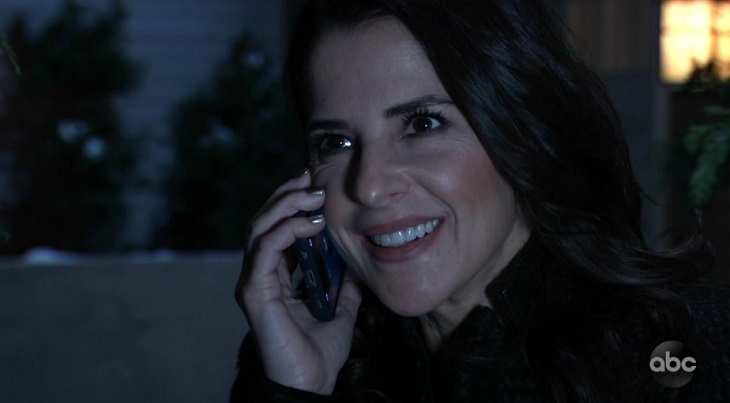 General Hospital spoilers tease that Sam McCall (Kelly Monaco) will be intrigued; possibly by something – or someone – she spots at Dawn of Day! A few episodes ago observant General Hospital viewers spotted DA Margaux Dawson (Elizabeth Hendrickson) with one of Shiloh Archer’s (Coby Ryan McLaughlin) books in her purse!

Might Sam spot Margaux there in a seminar and wonder what she’s doing there, and why she would have anything to do with the cult? Could Sam wonder if Margaux has a connection to Shiloh?

After all, Sam is aware that Margaux had conveniently ran into Drew Cain (Billy Miller) and almost seemed to be stalking him for quite a while, trying to get Jason Morgan’s (Steve Burton’s) memories out of him when she was after Sonny Corinthos (Maurice Benard).

Of course, Sam herself and Damian Spinelli (Bradford Anderson) put a stop to her pursuit of Sonny for the murder of Margaux’s father when they found all the love letters from her mother to Joe Scully (Robert Miano)!

General Hospital Spoilers – Is Margaux a Member Of The Cult?

But seeing Margaux at Dawn of Day may start the private investigator wheels turning in Sam’s head; Drew is the only common factor between Margaux and Shiloh, and Margaux tried to cozy up to Drew to get information much in the same way Sam herself is trying to cozy up to Shiloh now! Could there be a previous connection between Shiloh and Margaux centering around Drew?

Other General Hospital spoilers tease that Margaux is there to get inner healing for some pretty big mommy and daddy wounds in her heart, and the fact that Shiloh knew Drew in the past has nothing to do with it. She’s just there like other lost souls who have been reeled into the cult, not knowing what she’s getting into or what it’s all about behind the gentle and loving front.

Drew’s name is not mentioned in Shiloh’s book so she probably has no idea Shiloh knew Drew. Sam may ultimately wind up rescuing Margaux along with Kristina! Stay tuned to General Hospital and keep checking General Hospital spoilers frequently to see what happens with Sam’s sting and possibly subsequent investigations into Dawn of Day and what it’s really all about!