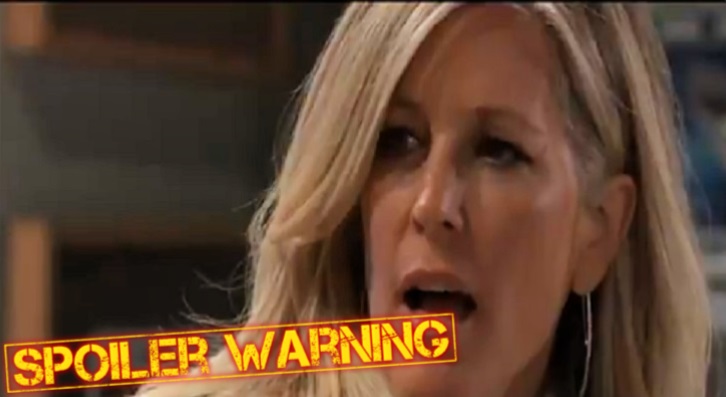 “General Hospital” spoilers for Tuesday, February 19, tease that Lulu Falconeri (Emme Rylan) will suggest she has an incredible story to tell. Nina Reeves (Michelle Stafford) and Curtis Ashford (Donnell Turner) aren’t convinced, but Lulu fully believes Franco Baldwin (Roger Howarth) attacked her. With that in mind, Lulu may want to go public with her version of events. Plenty of readers would love to hear all about it in The Invader!

Over with Maxie West (Kirsten Storms), she’ll tell Peter August (Wes Ramsey) that she’s about to find out the truth about Sasha Gilmore (Sofia Mattsson). Due to Maxie’s mani-pedi plan, she should get her hands on some DNA and know the facts soon enough. A new DNA test should help out tremendously.

Elsewhere, Curtis will have a conversation with Sasha and offer a warning. He’ll just hope Sasha is as genuine as she seems to be. Curtis will saw the DNA tests for himself, so he may not think Sasha’s lying. However, he’ll suspect she’s capable of exploiting Nina and causing pain.

Curtis will want to make sure they’re on the same page about protecting Nina’s heart, but a storm’s brewing thanks to Valentine Cassadine (James Patrick Stuart). Valentine’s fake daughter scheme should blow up in a big way down the road.

In the meantime, Drew Cain (Billy Miller) will want to know what kind of game Shiloh Archer (Coby Ryan McLaughlin) is playing. He’ll talk to Jason Morgan (Steve Burton) about that on Tuesday, so maybe they can form some new strategies and discuss keeping Sam McCall (Kelly Monaco) safe. You can bet their concerns will rev up as Shiloh and Sam deepen their plots.

“General Hospital” spoilers say Sam will be intrigued during her next Shiloh meeting. He’ll note that there’s something she has to see to understand. It sounds like Shiloh will take Sam on a little field trip, so she’d better watch her back. Sam will have to stay on guard as they continue to manipulate each other.

Finally, Dr. Kim Nero (Tamara Braun) will have an appointment at GH. She’ll cover for another OB-GYN, so Carly Corinthos (Laura Wright) and Sonny Corinthos (Maurice Benard) are in for a shock! Carly will be the patient looking for answers, so Sonny will be right by her side. They’ll both be anxious to learn if Carly is indeed pregnant and if so, what risks this will involve.

#GH #GeneralHospital Spoilers: Who Is Ryan’s Next Victim @celebratesoaps https://t.co/f8gduH257V