General Hospital Spoilers: Who Is Getting Engaged At The Nurses Ball?

General Hospital spoilers tease that someone is getting engaged at the Nurses Ball – but who? General Hospital viewers can think of several possibilities, although several couples might be rushing into things!

One couple who is the most logical to get engaged would be Dr. Hamilton Finn (Michael Easton) and Anna Devane (Finola Hughes). Finn already has the ring – or, actually her ex Robert Scorpio (Tristan Rogers) has it now. But, with Robert taking Laura Collins (Genie Francis) to the ball, might he give it back?

It’s iffy – other General Hospital spoilers say Robert will lose something. It could be the ring – and he and Laura will be busy trying to track down Ryan Chamberlain (Jon Lindstrom)! But couples have been known to get engaged and even married without a ring. General Hospital viewers should recall Valentin Cassadine (James Patrick Stuart) and Nina Reeves (Michelle Stafford) and their cigar bands.

Another couple who could be playing a part by getting engaged at the Nurses Ball would be Dr. Kevin Collins (Jon Lindstrom) and Ava Jerome (Maura West). They are pretending to be romantically involved to make Ryan Chamberlain jealous and draw him to Port Charles. Other General Hospital spoilers say he will show up at the Nurses Ball, so that could fit too! 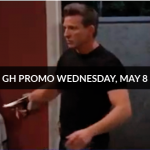 Dr. Kim Nero (Tamara Braun) and Julian Jerome (William DeVry) have been together for a while, will they get engaged at the ball? Considering she’s grieving the loss of her son Oscar Nero Quartermaine (Garren Lake Stitt) a surprise engagement might be a little soon.

However, before he died, he did have a dream about his mom flashing an engagement ring…hmmm…maybe! But Oscar would have preferred she marry his dad, Drew Cain (Billy Miller).

Peter August (Wes Ramsey) and Maxie Jones (Kirsten Storms) have just started dating. So they would be rushing things if they got engaged that soon. With a first date in Paris however, you never know! It could be a possibility.

Other General Hospital spoilers support a slight possibility of Michael Corinthos (Chad Duell) and Sasha Gilmore (Sofia Mattsson) getting engaged. The spoilers tease that Nina will be thrilled for Sasha. Valentin, not so much.

One more couple that again, is a slight possibility for engagement might be Detective Harrison Chase (Josh Swickard) and Willow Tait (Katelyn MacMullen). They, too have had a whirlwind romance, and if Shiloh Archer (Coby Ryan McLaughlin) is no longer in their way, why not?