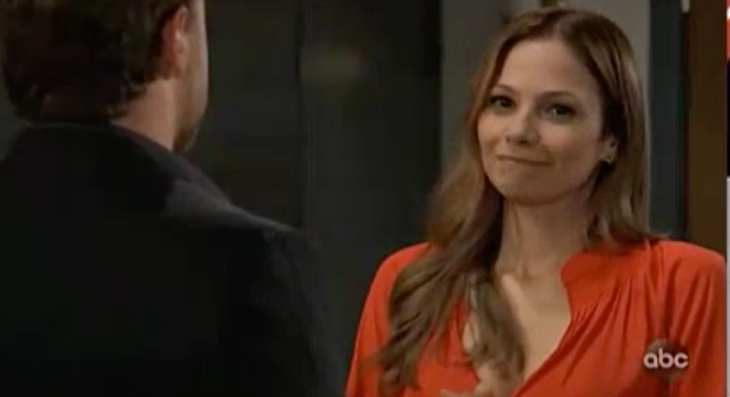 General Hospital spoilers for Wednesday, June 26 tease another day of excitement and drama for the fans as some tense storylines continue and others begin! Curtis Ashford (Donnell Turner) and Sam McCall (Kelly Monaco) are having a much belated catching-up session with each other when Curtis has some shocking news for his former investigative partner; he is dissolving the Ashford-McCall partnership likely because of taking the security job that’s really a cover for investigating Jasper Jacks (Ingo Rademacher) for Valentin Cassadine (James Patrick Stuart).

Considering Sam is an ex-wife of Drew Cain (Billy Miller) who still owns Crimson’s parent company Aurora Media, and an ex-lover of Jax, staying in the partnership could be a conflict of interest as well!

Meanwhile, over at Kim Nero’s (Tamara Braun) apartment, Drew has had to fight her off of him while she pleads with him to make a baby with her! Drew, like Kim’s boyfriend Julian Jerome (William DeVry) will probably tell her she needs to heal more from the death of their son Oscar Nero Quartermaine (Garren Lake Stitt) before having another baby. Kim can’t see that she’s subconsciously trying to make a little Oscar to replace the one they’ve lost!

At General Hospital, Bobbie Spencer (Jacklyn Zeman) glowers at her son Lucas Jones (Ryan Carnes) as he tries to give her the results of her blood tests; she doesn’t want to hear that she might have diabetes, since she’s never been diagnosed with type 1 diabetes, and she’s not overweight, and she can’t see how she could have developed type 2 diabetes which is usually blamed on being overweight and eating the wrong things!

Over at Charlie’s Pub, Alexis Davis (Nancy Lee Grahn) lays into Julian about trying to protect Wiley Cooper-Jones (Eric and Theodore) by destroying his adoption records at the state level; of course Julian won’t tell anyone their birth daughter Sam helped him! Alexis tells Julian that in doing so he’s given Shiloh Archer (Coby Ryan McLaughlin) the ammunition to blow his family apart!

Slapping Julian across the face might've given Bobbie a moment of satisfaction, but fixing his mess will be a group effort. @WilliamdeVry1#GH is brand-new and STARTS NOW on ABC! @JackieZeman @kinshriner pic.twitter.com/XultH6uRKA

At the Port Charles courthouse, family court is still in session as Attorney Zahra Amir (Maysoon Zayid) asks Shiloh if he wants to hear something she has to say or not, while in Beecher’s Corners Jason Morgan (Steve Burton) tries to get away from a cop who recognizes him so he can get Carol Lockhart (Mandy Musgrave) back to Port Charles with her damning evidence against Shiloh, proving that Shiloh did murder Willow Tait’s (Katelyn MacMullen) father, Douglas Miller!