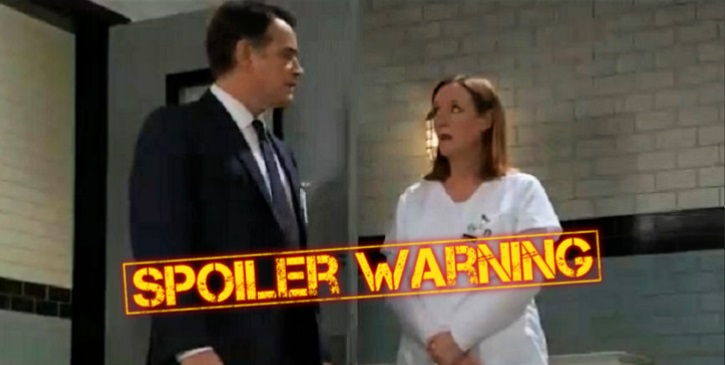 “General Hospital” spoilers for Wednesday, January 30, tease that Anna Devane (Finola Hughes) will defend herself. She’ll assure Robert Scorpio (Tristan Rogers) that she never met or worked with Dr. Cabot. Anna will be perplexed as to why the notes claim she did, but she’ll offer to take a lie detector test to set the record straight.

Robert won’t really know what to believe here, but he may decide he buys Anna’s story. A lie detector seems a little extreme considering this is Anna we’re talking about. Besides, the fact that she’s offering may be enough proof for Robert. Once he accepts that Anna’s telling the truth, they can focus on the mystery of the discrepancy. Robert will want to know why his notes don’t line up with the facts.

Of course, it’s possible Alex Devane Marick (Finola Hughes) posed as her twin sister for a Cabot project. She’s been known to step in for Anna occasionally! While Robert and Anna mull over this mess, Oscar Nero (Garren Stitt) will talk to Josslyn Jacks (Eden McCoy) about his parents. He’ll point out that his mom has been spending a lot more time with his dad lately.

Josslyn will seem taken aback, but she should be pleased. After all, Joss was pushing for this not too long ago! Drew Cain (Billy Miller) and Dr. Kim Nero (Tamara Braun) are certainly going to need each other in the difficult weeks ahead. They might as well let their bond grow and get ready for all the heartbreak.

“General Hospital” spoilers say Drew will encourage Kim to have dinner with him. She may play it coy, but she’ll probably accept. Kim is still drawn to Drew, especially now that Oscar’s officially dying. It’s a horrible experience that they have to endure together, so a fun date night might be a nice break from the drama.

Speaking of drama, Lucas Jones (Ryan Carnes) will be dealing with some on Wednesday. He’ll open up to Brad Cooper (Parry Shen) about his concerns, which will undoubtedly involve “Wiley” Cooper-Jones. At Charlie’s Pub, Michael Corinthos (Chad Duell) will be on babysitting duty. While he’s keeping a close eye on his godson, it looks like Michael will warn Julian Jerome (William deVry) to keep his distance.

Michael should really steer clear of the restaurant Julian owns if he wants a Grandpa-free zone. Nevertheless, he’ll hang out with “Wiley” there and hope to keep the kid happy. Willow Tait (Katelyn MacMullen) will also pop up at the pub, which Julian won’t be happy about. He’ll suggest that he’s keeping his promise to stay out of “Wiley’s” life. Julian will wonder if Willow intends to hold up her end of the bargain, too.

After their latest showdown, Julian will start to get nervous. He’ll meet up with Brad and insist that Willow poses a serious threat. Julian will want Brad to stay as far away from Willow as possible. They can’t have Willow getting too close and somehow learning that this isn’t her biological son.

At Ferncliff, GH spoilers say a massive blunder will leave Ryan Chamberlain (Jon Lindstrom) reeling. He’ll be furious over the staff’s incompetence. They apparently let something happen to “Wilson Ritter” aka Dr. Kevin Collins (Jon Lindstrom) that they shouldn’t have, so Ryan will blow his top.

“General Hospital” has some exciting scenes in store for us. We’ll give you updates as other news and rumors emerge. Stick with ABC’s GH and don’t forget to check Soap Opera Spy often for the latest “General Hospital” spoilers, rumors, updates and news.