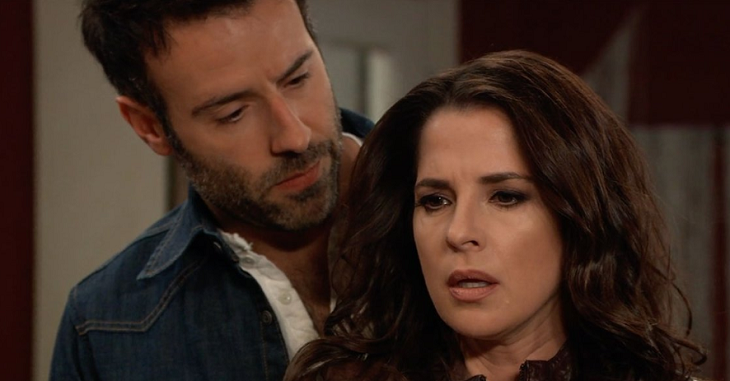 “General Hospital” spoilers for Wednesday, April 17, tease that Harrison Chase (Josh Swickard) will be prepared to celebrate Dr. Hamilton Finn’s (Michael Easton) engagement. It looks like he’ll come bearing a bottle of Champagne, but he’ll be met with disappointing news. Finn hasn’t been able to pop the question yet, but he’ll hope to give Anna Devane (Finola Hughes) a wonderful proposal soon.

At Crimson, Franco Baldwin (Roger Howarth) will push for a chat with Nina Reeves (Michelle Stafford). He’ll want to discuss their step kids and what they can do to help Aiden Webber (Jason David). Nina may point out that Charlotte Cassadine (Scarlett Fernandez) already backed off when it comes to bullying, but Franco will have another strategy in mind.

“General Hospital” spoilers say Franco will want to boost Aiden’s “cool” factor a bit. He’ll hope Charlotte can put in a good word for him since she’s one of the popular students. Nina may not think this will work, but Franco is desperate. He just wants everyone else to treat Aiden with the kindness and respect he deserves.

Elizabeth Webber (Rebecca Herbst) will also have a phone conversation on Wednesday. She’ll wonder where the person on the other end is, so she could be talking to Franco or Cameron Webber (William Lipton). Either way, Liz will probably find herself with more messes to clean up.

Other “General Hospital” spoilers say Michael Corinthos (Chad Duell) will seek more information. Willow Tait (Katelyn MacMullen) just admitted that her baby with Shiloh Archer (Coby Ryan McLaughlin) is still alive, so Michael will be curious. He’ll ask if Willow knows the adoptive family, so she’ll have to decide if she’s going to lie or tell the truth.

At GH, Jason Morgan (Steve Burton) will realize why the drug test came back clean. He’ll determine that Brad Cooper (Parry Shen) is buying into all Shiloh’s DoD teachings. Jason will hate that his plan hit this snag, but he won’t give up on taking Shiloh down for good.

Of course, Shiloh will be plotting something similar across town. He’s not too happy with Jason right now, so he’ll recruit Sam McCall (Kelly Monaco) for a scheme. Shiloh will think Sam can be Dawn of Day’s secret weapon. He’ll hope to use Sam to his advantage as he investigates Jason and works to find Kristina Corinthos-Davis (Lexi Ainsworth).

Sam knows Jason was indeed behind the kidnapping, but she’ll have to act like she’s out of the loop. She’ll assure Shiloh of her loyalty, but she’ll obviously want to protect Kristina instead. Over with Sonny Corinthos (Maurice Benard), “General Hospital” spoilers say he’ll have an argument with Margaux Dawson (Elizabeth Hendrickson). She’ll suggest that Sonny’s got something to hide, which is true.

Nevertheless, Sonny will stay tight-lipped about what he’s been up to and hope he can change Margaux’s mind about devious Dawn of Day. It sounds like some great scenes are coming up. We’ll give you updates as other details and rumors emerge. Stick with ABC’s GH and don’t forget to check Soap Opera Spy often for the latest “General Hospital” spoilers, rumors, updates, and news.