General Hospital spoilers for Tuesday, June 25 promise another day of suspenseful drama as “Wiley’s Army” works to keep Shiloh Archer (Coby Ryan McLaughlin) away from Wiley Cooper-Jones (Eric and Theodore) and the rest of the Corinthos clan work on helping Sonny Corinthos’ (Maurice Benard) new “cousin”. General Hospital viewers will recall that Dev (Ashton Arbab) was the young Turkish teenager, apparently an orphan, who helped out Sonny and the WSB and led them to Dante Falconeri (Dominic Zamprogna).

First, Kim Nero (Tamara Braun) and Drew Cain (Billy Miller) are in Kim’s apartment, where she has invited him for an evening of tea and – sexuality? Kim has a unique idea for Drew to keep their late son Oscar Nero Quartermaine (Garren Lake Stitt) alive; by making him a new baby sibling! It will be interesting to see how that turns out!

GH SPoilers– Bobbie Has A Showdown With Julian

At Charlie’s Pub, Bobbie Spencer (Jacklyn Zeman) tears into Julian Jerome (William DeVry) about destroying Wiley’s adoption records, which Lucas Jones (Ryan Carnes) told her about in Monday’s episode; she tells him he might have lost Wiley for all of them! 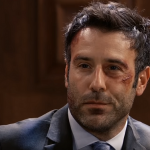 Meanwhile, at Port Charles Family Court, Willow Tait (Katelyn MacMullen) who finally arrived late with a police escort is livid as a smug Shiloh smirks; she lets loose with “You want me to say it? I’ll say it!” Will she “say it” at Shiloh, or at the judge, who refused to wait for her to get there to rule in favor of Shiloh? At least it was her boyfriend Detective Harrison Chase (Josh Swickard) who was dispatched to get her from her schoolroom and to court!

Elsewhere, outside in a Port Charles park, possibly in “Oscar’s Meadow” Cameron Webber (William Lipton) gets snarky while doing community service as he sees Dev with Josslyn Jacks (Eden McCoy) and wants to know what’s going on and if that guy robbed her!

Brad's in a bad way, West Coast. Bobbie thinks she can treat him… but he's got to come clean about a few things first. @lldubs
A feisty, new #GH STARTS NOW on ABC! @parryshen @JackieZeman pic.twitter.com/0jXoGwAhzX

At the Corinthos compound, Sonny has been working on helping Dev stay in the United States legally and has come up with an idea; he tells Carly Corinthos (Laura Wright) that he’s finally found a way for “Devin” to stick around!

Meanwhile, Michael Corinthos (Chad Duell) and Jason Morgan (Steve Burton) have gone to Beecher’s Corners to try and find out more about the suspected murder of Willow’s father, Douglas Miller, and some proof to use against Shiloh. Jason assures someone that he will not let anything happen to them! Could it be the young waitress seen in Monday’s episode in a diner?

Bold and the Beautiful Spoilers, Tuesday, June 25: Ridge & Brooke’s Relationship Is Put To The Test- Pam Gives Brooke A Clue Of What Could Have Happened Leading Up To Emma’s Death