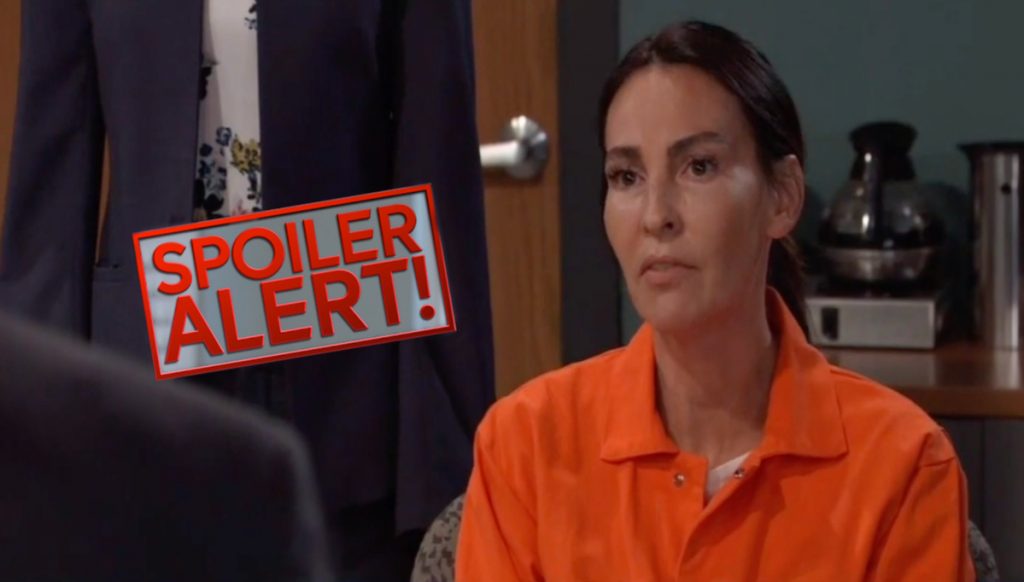 Hayden Barnes (Rebecca Budig) sits at a restaurant with former fiancé Dr. Hamilton Finn (Michael Easton) catching him up on why she left and why she’s back – sort of! She wants to move on from their past and tells him “we’ll just leave it at that and move on!” She seems to be very short with him and maybe just a tad angry; maybe it’s because he didn’t come to meet her when she reached out to him and went off with Anna Devane (Finola Hughes) on an adventure instead!

Elizabeth Baldwin (Rebecca Herbst) is talking to someone, telling them “She obviously knows something!” This could either be about Hayden or possibly about Liesl Obrecht (Kathleen Gati) and she might be talking to her husband Franco Baldwin (Roger Howarth) about what Liesl drunkenly let slip to him at their wedding reception on the Haunted Star.

Then Franco goes and visits Liesl in her hospital room and asks her to finish telling him what she had started, in other words, what she knows about Wiley Cooper-Jones’ (Eric and Theodore Olson) real father!

In the Port Charles jail, Detective Harrison Chase (Josh Swickard) talks to his girlfriend Willow Tait (Katelyn MacMullen), undoubtedly frustrated at his inability to get new District Attorney Robert Scorpio (Tristan Rogers) to issue a warrant to bring Shiloh Archer (Coby Ryan McLaughlin) in and says something to the effect of it being time to turn in his badge and go work for Sonny Corinthos (Maurice Benard)!

General Hospital Spoilers: Jason Morgan Has Someone Who Can Take Shiloh Archer Down

Speaking of Sonny, Chase doesn’t know that back upstairs Sonny’s enforcer Jason Morgan (Steve Burton) brought news he had a corroborating witness that Robert needed at the risk of his own arrest, namely Harmony Miller (Inga Cadranel), who tells Robert and Mac Scorpio (John J. York) that she is willing,                        to tell the truth about everything, everything being her part in taking the fall for Shiloh which put her in Pentonville Prison and also going back to when her late husband and Willow’s father, Douglas Miller (uncast character) was murdered!

Meanwhile, back at the Quartermaine mansion where Oscar Nero Quartermaine’s (Garren Lake Stitt) will is being read and the Quartermaines are shocked that Oscar left his ELQ shares to Shiloh for Dawn of Day, obviously not knowing what Shiloh really is nor that Dawn of Day is a front for many criminal activities! Shiloh has come to the reading as per Oscar’s invitation made months ago to claim his money, and snarks at a grieving Kim Nero (Tamara Braun), asking her did she really want to second guess her son’s dying wish?