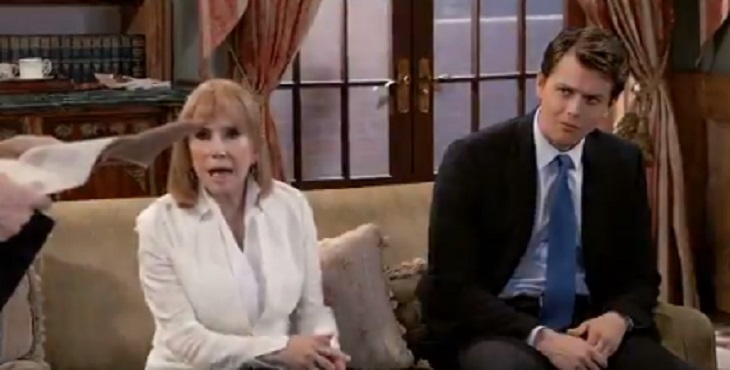 Welcome to your Wednesday, July 10th General Hospital (GH) recap! We begin our day at the Metro Court, where Sasha Gilmore (Sofia Mattson) is sitting at a table. Shiloh Archer (Coby Ryan McLaughlin) approaches and asks if she is okay, suddenly Michael Corinthos (Chad Duell) tackles him away from the table.

At the Port Charles PD, Mac Scorpio (John York) asks Harrison Chase (Josh Swickard) how Willow is holding up. He says she’s holding up as best that she can. Robert Scorpio (Tristan Rogers) enters and says his client has evidence against Shiloh, its Sam Mccall (Kelly Monaco).

In Sonny Corinthos’s (Maurice Bernard) office, he is telling Jason Morgan (Steve Burton) that he should be in hiding. Brick (Stephen Smith) enters and brings all the ID information for his “cousin” Dev.

Shiloh Archer protests that Michael Corinthos attacked him and he says that next time he might break his neck. Sasha says its rude to sit at someone’s else table and it could be seen as an unwanted advance. Shiloh apologizes to Sasha and she tells him to run along before she calls the manager.

Michael says he needs to leave for his cousin Oscars will reading. Carly arrives and sees Sasha sitting at a table, saying anything she wants is on the house.

At the police station, Sam is explaining how she has the confession from Carol Lockhart about the murder of Willow Tait’s (Katelyn MacMullen) father. Robert who is now the acting District Attorney says he does not think getting a subpoena to bring her to Port Charles will be easy.

Sam says Carol’s testimony should be enough, but Robert isn’t so sure. He thinks a judge may think there was coercion for the statement. Chase gets angry and says they need to prosecute Shiloh immediately.

At his office, Sonny explains to Jason about the situation with Dev and how he saved him in Turkey. Jason questions if it’s a good idea to have him join their family. Carly shows up and has brought Dev to drop him off on her way to work.

Dev meets Jason and Brick while Sonny explains they have all of his documents ready.

At Oscar’s Meadow, Drew Cain (Billy Miller) arrives at the same time as Kim Nero (Tamara Braun). Kim asks if he remembers what happened and he says yes, she tried to force him to conceive a baby with her. Drew says what she did last night crossed a big line and she agrees. Kim starts apologizing and says she is so disgusted with herself, she’s ready to face the consequences.

Drew says she needs to get help and he will not be pressing charges.

"How did my brother almost marry you?" #GH pic.twitter.com/3bWWWEYdYX

General Hospital Recap – Today is the reading of Oscar’s Will

At the Corinthos mansion, Cameron Webber (William Lipton) tells Dev (Ashton Arbab) that today is the reading of Oscar Nero’s will. In the kitchen, Josslyn Jax (Eden McCoy) gives her mother Carly Corinthos (Laura Wright) a healthy kale juice. Carly offers to come to the will reading, but Josslyn says she will be fine.

At the Quartermaine mansion, Alexis Davis (Nancy Lee Grahn) has gathered together Monica (Leslie Charleson) , Olivia (Lisa LoCicero) and Ned (Wally Kurth). She explains they are doing the reading of the will and there will be no fighting. Josslyn and Cameron arrive and he explains to them all the antics that happened at the wedding reception.

Alexis reads off all the different things that Oscar has left for the different family members. Josslyn gets very upset and storms off.

Jason shows up at the police station and surrenders to the police. Alexis says the ELQ voting shares are going to someone who helped Oscar when he was down and out…. Shiloh Archer!…flash to preview.