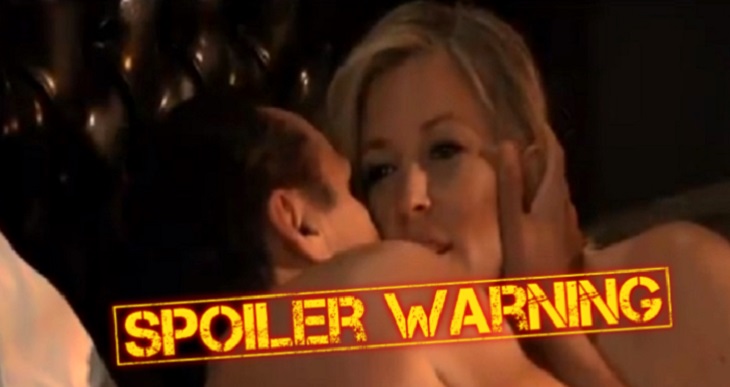 “General Hospital” spoilers for Thursday, February 14, tease that Kristina Corinthos-Davis (Lexi Ainsworth) will get some good news. Valerie Spencer (Brytni Sarpy) has been avoiding Kristina lately thanks to that kiss they shared. It made things pretty awkward between them, but Valerie will hope to move past all that. She’ll earn a smile from Kristina when she suggests they should be friends again.

Over with Sam McCall (Kelly Monaco), she’ll pretend to hang on Shiloh Archer’s (Coby Ryan McLaughlin) every word. Shiloh will encourage Sam to stop running and find peace within herself, so Sam will agree to try. GH fans can expect some close moments, which should leave Kristina even more jealous than before!

Across town, Damian Spinelli (Bradford Anderson) will show up to see Jason Morgan (Steve Burton). He’s been digging around to help Sam and Jason out, so he’ll have more information on Shiloh. It turns out Shiloh was once caught up in something dangerous. When Jason wonders just how dangerous, Spinelli will admit that it involved a murder.

Shiloh seems eager to keep Drew Cain’s (Billy Miller) memories buried, so Spinelli’s info makes sense. Perhaps Shiloh came clean about killing someone during one of those confessions he mentioned. Whatever the case, Drew will have plenty to keep him busy for now. He’ll head over to the PCPD to marry Elizabeth Webber (Rebecca Herbst) and Franco Baldwin (Roger Howarth).

Liz will want to tie the knot while Franco’s behind bars, so he should think that’s crazy. However, it’s clear that Elizabeth is 100-percent convinced of Franco’s innocence. She’ll hope this shows Franco that she’s got his back and always will.

While Franco and Liz have a jailhouse wedding, Sonny Corinthos (Maurice Benard) and Carly Corinthos (Laura Wright) will head to the bedroom. They’ll enjoy some lovemaking before exchanging big announcements. Sonny will hope to please Carly with a getaway for just the two of them. That’ll warm Carly’s heart and catch her off guard, but her surprise is sure to blow Sonny away!

“General Hospital” spoilers say Carly’s got a Corinthos bun in the oven. She’ll eventually tell Sonny she’s pregnant, so they’ll have to process this baby curveball. In Sweden, Anna Devane (Finola Hughes) will offer reassurance. Dr. Arthur Cabot is blind, but he still recognized Anna’s voice and will continue to put the clues together. He’ll determine that Anna must be Alex Devane Marick’s (Finola Hughes) twin.

Anna won’t want Dr. Cabot to judge her for Alex’s actions. The doc may have been burned by Alex, but Anna will think she deserves a chance to prove she’s trustworthy. She’ll push Dr. Cabot to go along with the plan Robert Scorpio (Tristan Rogers) and Dr. Hamilton Finn (Michael Easton) have in mind.