General Hospital Spoilers: The Walls Are Closing In On Ryan, Tries To Frame Franco 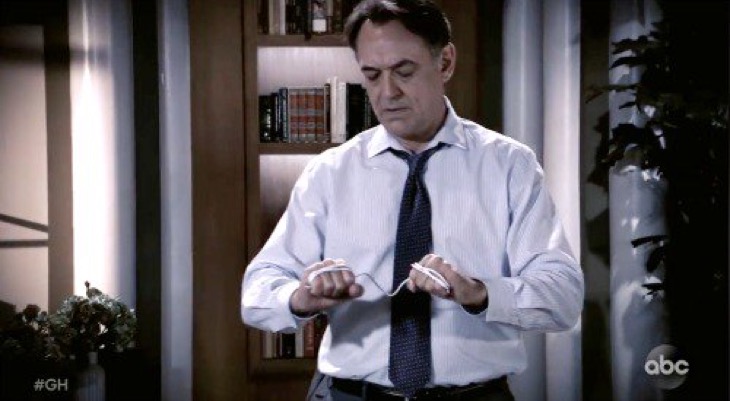 General Hospital spoilers indicate that the walls are closing in on Ryan Chamberlain. (Jon Lindstrom) It is only a matter of time before the truth comes out about his true identity and of course, all of the mayhem that he has been causing in Port Charles. Here’s what you need to know.

After Ryan’s botched attempt to kill off Lulu Falconeri, (Emme Rylan) he realizes that time is running out on him. The entire house of cards that he has carefully constructed on his end will soon come tumbling down. As a matter of fact, General Hospital co-head writer Chris Van Etten puts it this way, “He presents Ava Jerome (Maura West) with a romantic gesture that we can only hope won’t be her undoing!”

Meanwhile, it looks as though Ryan will be looking at Franco Baldwin (Roger Howarth) as his scapegoat. Even though Franco’s not the same person that he was before, not everyone is convinced that they can trust Franco and especially Elizabeth Webber. Co-head writer Shelly Altman adds, “Ryan is nothing if not an opportunist. So when he’s able to point the investigation toward Franco, he takes advantage of that fact. It will have a big impact on Liz and Franco.”

Also, even though things look like they are heating up between Jason Morgan (Steve Burton) and Sam McCall, (Kelly Monaco) don’t expect that they will begin a new romance right away. That’s because Sam has another plan in mind: she is trying to cozy up to Shiloh, which means that she has to keep Jason at arm’s length. Even though they will try to sneak away to be with one another, this might also put them in danger with Shiloh. Of course, fans will have to tune in for all of the action. February is looking like a very promising month for drama in Port Charles.

In the meantime, don’t forget that General Hospital airs weekdays on the ABC network. Check your local listings for times. Let us know what you think by dropping us a line with your thoughts in our comments section below. And as always, don’t forget to check back with Soap Opera Spy for all the latest news, updates and spoilers on General Hospital and all of your favorite daytime television shows right here!

Days Of Our Lives Spoilers: Chloe Chooses Stefan Over Brady – Are Chloe And Brady Through?