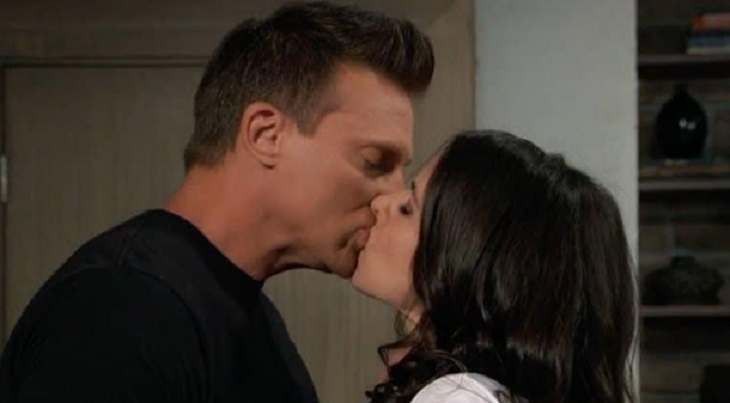 General Hospital spoilers tease there may be a baby surprise in the works for Jason Morgan (Steve Burton) and Sam McCall (Kelly Monaco)! True, a woman’s body does retain natural birth control for a period of time after giving birth, but Scout Cain (Palmer and Poe Parker) is nearly two years old, and Sam hasn’t been with a man intimately for over a year now.

Did she anticipate taking her relationship with Jason to the next level in time to start on birth control again? If she didn’t, General Hospital viewers may just see a little brother or sister for Danny Morgan (TK Weaver) and Scout around the time GH is getting ready for fall sweeps!

Scout herself was a surprise, apparently having been conceived when Drew Cain (Billy Miller) and Sam went to Cassadine Island after Nikolas Cassadine (Nick Stabile). This, of course, was when Drew was thought to be Jason by everyone including himself! Another child, whether planned or unplanned for Jason and Sam would help cement their relationship and might even lead to a remarriage.

Jason hasn’t had to dive into dangerous situations lately or act as Sonny Corinthos’ (Maurice Benard) mob enforcer either, since Sonny himself has been more family focused and concentrating on his legal businesses. This would be a perfect time for Jason to settle down a bit and explore being more of a family man.

General Hospital Spoilers – Jason Ready To Be A Dad Again?

This part of Jason came out when he made the grilled cheese sandwiches for supper and eggs for breakfast for Sam!

In Friday, January 25th’s episode Carly Corinthos (Laura Wright) hugged Jason with joy when she found out he and Sam were finally really together; and mentioned that although she hadn’t cared much for Sam in the beginning, she’d become more accepting of her when she realized Sam wasn’t trying to change Jason and accepted him as he was. Sam won’t have to change Jason, it looks like he’s changing on his own!

Keep watching GH and keep checking General Hospital spoilers frequently to see all the exciting developments as we come into February sweeps!

Bold And The Beautiful Spoilers: Brooke And Ridge Suspicious Of Speedy Adoption, Find Out It’s Not Legal?