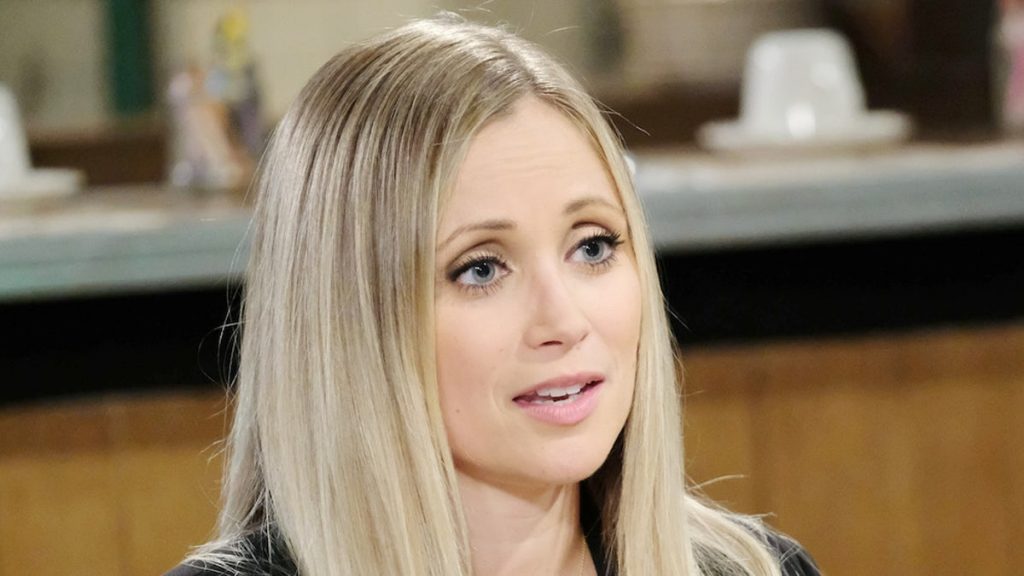 General Hospital spoilers tease that once again Lulu Spencer (Emme Rylan) and Dustin Phillips (Mark Lawson) will cross paths; will Lulu continue to deny her attraction to him, or will she let the sparks happen?

General Hospital viewers can see that Lulu and Dustin feel attraction toward one another, and he’s willing to be patient and go slow with her, knowing she is very freshly divorced. For Lulu’s part a rebound relationship, especially this soon after her divorce from Dante Falconeri (Dominic Zamprogna) wouldn’t be good anyway and as far as she is concerned, it would be improper as well! However, she can’t deny that she likes Dustin – and likes him a lot!

Lulu and Dustin have fun when they are together, and make each other feel good, there’s no doubt about that! Plus Rocco Falconeri (O’Neill Monahan) and he got along great, and that is a very important consideration for any single mother contemplating dating someone! Other points to be considered would be to make sure anyone potentially having contact with one’s children doesn’t have any predatory activity in their past, and even if a woman doesn’t have children she should check for that, there are many resources available through one’s local police department as Lulu would be strongly aware of. Chances are, since Dustin is a teacher he wouldn’t have anything creepy about him but one can’t be too careful these days!

It might take a while before Lulu is ready for romance. She will need to heal from her separation and divorce from Dante and the feelings of rejection that inevitably come with it, even though Dante did not actually reject her – she just feels the same grief as if he had, or if he had died. The feelings are the same whether the loss of a relationship is due to divorce or death – the loved one is gone from one’s life, and there is a big deep hole of pain in one’s heart. That will take a long time to heal, and it is best not to try to fill it with someone else in an effort to heal it. But having fun with a – shall we say – semi-platonic friend? That’s something that will be a good thing!

Many of the best and longest-lasting relationships do NOT begin with hitting the sheets, but with a friendship between two partners that deepens with time. That way, lust does not confuse the issues, and trust is built among two friends, then two close friends, and finally when the two become lovers there are no trust issues among them. That’s not to say that there aren’t any underlying sparks in such relationships, as there usually are. But the end result is usually a slow burn ending in a long-lasting passionate fire instead of just a flash in the pan!

Young And The Restless Spoilers: Summer And Zoe’s Wild Showdown Over Theo

Bold And The Beautiful Spoilers: Ridge Leaves Brooke After Fierce Argument And Ends Up In Shauna’s Bed