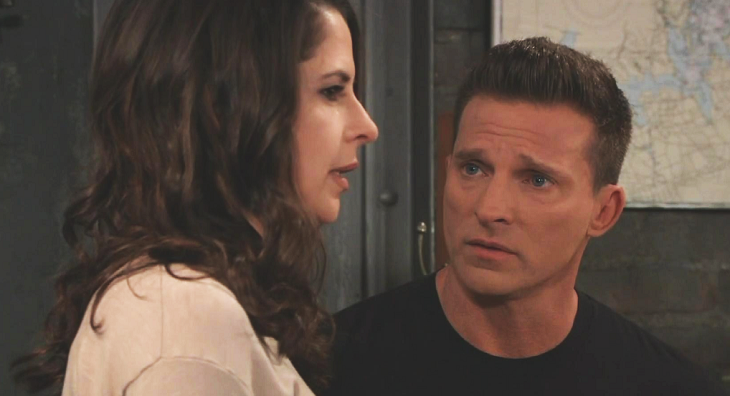 General Hospital spoilers tease that Sam McCall (Kelly Monaco) will have a proposition, or perhaps a proposal, for Jason Morgan (Steve Burton). General Hospital previews showed Jason coming in on Sam and her father Julian Jerome (William DeVry). Julian wanted help for himself and her brother Lucas Jones (Ryan Carnes). They want to keep Shiloh Archer (Coby Ryan McLaughlin) away from Wiley Cooper-Jones (Eric and Theodore).

Even though Jason is already pretty much committed to protecting Wiley, Sam will propose that they possibly work together with Julian as well, to make that protection work.

The main objective will be to keep Shiloh from finding out that he is Wiley’s birth father. Of course that would not be too difficult considering he actually is not. The original baby that Lucas and Brad Cooper (Parry Shen) adopted died.

General Hospital Spoilers: Will Margaux Throw The Book At Ava, To Cover Up Her Ryan Mistake?

Lucas is already working with Alexis Davis (Nancy Lee Grahn) to make sure the birth and adoption records are sealed. They would not have shown the birth father’s name anyway, although it would have the birth mother, Willow Tait’s (Katelyn MacMullen) name.

The problem may come with making sure no Dawn of Day followers with allegiances to Shiloh have access to the records. Because they would gladly procure them.

If Sam and Jason didn’t keep a list of names from the pledges they burned, that could be a problem. There may be followers who didn’t get to the pledge stage working at GH and even in the vital records office that issues birth and death certificates.

Julian, Alexis, Sam, Jason, Lucas, Willow, Michael Corinthos (Chad Duell), hopefully Brad, and Detective Harrison Chase (Josh Swickard) all have the same goal. They all want to protect Wiley from Shiloh. And that is a lot of people for Shiloh to try and get through!

Sam and Jason may contribute with gathering or providing dirt they already have on Shiloh to prevent his being approved for a custody claim if the issue ever comes up. They would want to prove he would be an unfit father.

They may even enlist Dr. Monica Quartermaine (Leslie Charleson) in making sure no one gets to the records stored at GH. Stay tuned to General Hospital and keep checking General Hospital spoilers frequently for all the latest news, updates, and developments!