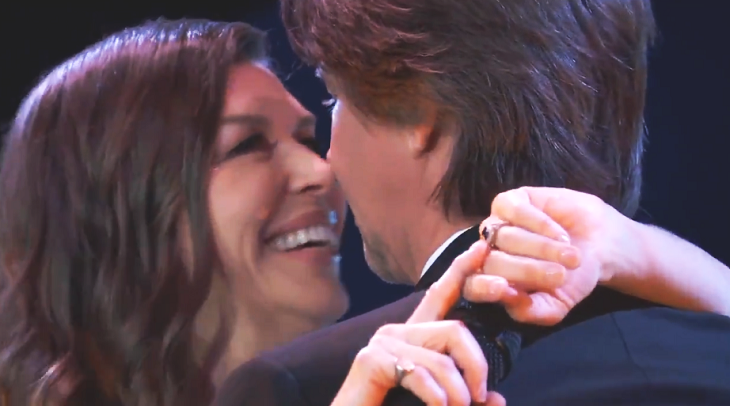 General Hospital (GH) recap for Tuesday, May 21, 2019, reveals Hamilton Finn’s (Michael Easton) ring flies out of his hand and under Anna Devane’s (Finola Hughes) feet. Finn goes out on stage and proposes to Anna.

Lucy Coe (Lynn Herring) talks to Felicia Scorpio (Kristina Wagner). Felicia thinks Finn and Anna are perfect for each other. Lucy believes something is wrong with Kevin and Ava’s relationship. Anna stammer for a minute, Finn thinks her answer is no. Anna tells Finn she would love to marry him. Chase congratulates Anna and hugs Finn. Peter August (Wes Ramsey) takes his turn at hugging Anna. Anna suggests to Finn that they leave early and they kiss.

General Hospital’s Cameron Webber (William Lipton) tell Jocelyn Jacks (Eden McCoy) that he has a message for her from Oscar Nero Quartermaine (Garren Stitt). Cameron delivers Oscar’s video, and Jocelyn gets dressed and goes to the ball to perform. Carly Corinthos (Laura Wright) and Jasper Jacks (Ingo Rademacher) are shocked when Jocelyn shows up at the nurse’s ball. Jocelyn tells Carly and Jacks about her message from Oscar. Cameron comes onstage to sing, Jocelyn is excited to hear him.

Sonny's not giving Shiloh an inch, West Coast. Is the #NursesBall about to take a turn for the turbulent? #GH is brand-new and STARTS NOW on ABC! @MauriceBenard pic.twitter.com/SShwDXvyQS

Curtis wakes up and tries to wake Laura. Laura wants the authorities to let the PCPD know that Ryan Chamberlain (Jon Lindstrom) is alive and on his way there. Curtis calls Chase and tells him that Ryan is alive and on the way to Port Charles. Laura calls Kevin to warn him about Ryan but get his voicemail. Ryan knocks Kevin out, and steps over him as Ava sings. 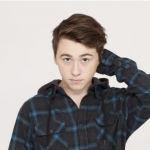 Alexis and Neil Byrne (Joe Flanigan) speak to Kristina who believes Sam is falling under Shiloh’s spell. Sonny wants Alexis and Neil to take Kristina home; she refuses to leave without talking to Sam. Neil assures Kristina that she could hurt them both if she does, Sonny promises to keep an eye on Shiloh. Meanwhile, Lucas Jones (Ryan Carnes) wonders what is going on with Brad Cooper (Parry Shen). Shiloh invites Lucas to DOD and mentions upper-level classes to Brad. Shiloh and Brad walk off together, Lucas thinks it is strange.

General Hospital’s Franco Baldwin and Liesl Obrecht perform at the ball. Liz is shocked that Franco didn’t tell her about the performance. Liz and Franco go backstage to talk to Cameron before his performance.

General Hospital’s Michael Corinthos (Chad Duell) and Sasha Gilmore (Sofia Mattsson) are talking to Willow Tait (Katelynn MacMullen) when she gets a call from Diana Miller (Carolyn Hennesy). Willow goes to answer the phone and runs into Nina Reeves (Michelle Stafford) spilling her drink all over the both of them. Willow talks to Diane about the baby, Nina overhears and asks if she had a child. Shiloh overhears Willow and Nina’s conversation.