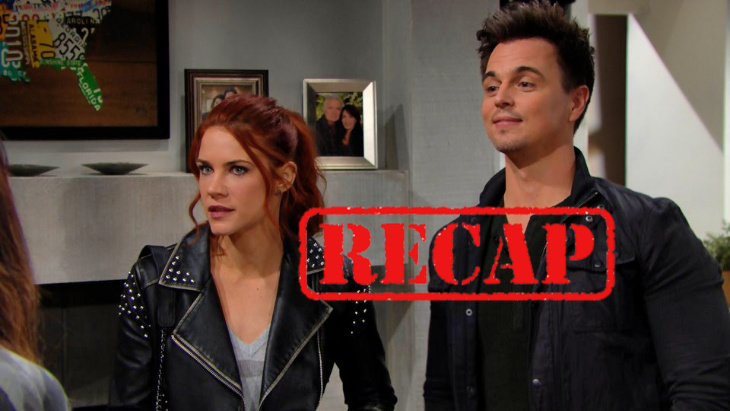 “Bold and the Beautiful” (BB) recap for Thursday, February 7, 2019 reveals that over at the cabin, Hope Logan Spencer (Annika Noelle) and Brooke Logan Forrester (Katherine Kelly Lang) joke with Donna Logan (Jennifer Gareis) and Katie Logan Forrester (Heather Tom) as they work on a puzzle.

Talk turns to Steffy Forrester Spencer’s (Jacqueline Wood) children and Hope wonders if Kelly and Phoebe’s hair will get darker. Liam Spencer (Scott Clifton) arrives with food and Hope asks him about the girls’ hair color. She admits she can’t stop thinking about Phoebe. Liam’s thinking of leaving them to it, but Hope asks him to stay. Brooke urges her to talk if she needs to, they understand. Hope isn’t sure what to say – she’s sad, but it goes so much deeper than that.

Katie assures her they want to help and they’re there whether she wants to say something or say nothing. Liam tells Hope, “I failed you.” He feels he should have been there the night their daughter died. He says, “I’m really sorry,” and embraces his wife. Hope assures him he could never fail her, but Liam asserts that he has…more than once. Hope thinks they’re stronger and wiser. She’ll never understand why God took Beth, but there’s something that might help her go on…when Steffy put Phoebe in her arms it was like electricity went through her arms to her heart. The baby, whose mother didn’t want her, makes her feel like a mother. She believes Phoebe came into her life to give her back hope.

Over at the cliff house, Wyatt Spencer (Darin Brooks) and Sally Spectra (Courtney Hope) arrive to meet Phoebe. While visiting, they remark on her resemblance to Kelly. Steffy Forrester Spencer agrees, she sees it sometimes too. Wyatt feels bad about Liam Spencer and Hope Logan Spencer losing Beth. Talk turns to Phoebe’s birth mother. Sally and Wyatt learn that she was determined to put the adoption behind her and that they connected through a colleague of Taylor Hayes’ (Hunter Tylo).

As they reflect on things happening whether you’re ready or not, Sally jokes about when she met Wyatt. Steffy puts them on the babysitting list as they’re leaving. Wyatt asks if Steffy thinks Liam’s okay. Steffy feels his conscious may be bothering him but he’ll be okay. Once alone, Steffy talks to Phoebe, telling her she’s safe with her, and that’s where she’ll stay.

Today on #BoldandBeautiful, Zoe updates Xander about meeting Flo and her frustration that there are still many questions left unanswered. pic.twitter.com/fIdzVblfsy

In the design office at Forrester Creations, Zoe Buckingham (Kiara Barnes) finds Xander Avant (Adian Bradley) and they share a kiss. Zoe explains the mystery of why Dr. Reese Buckingham (Wayne Brady) didn’t want her at his apartment is solved. She talks about the young and pretty Florence (Katrina Bowden) – what she still doesn’t know is why she was living with her father. Zoe’s sure she knows what’s going on with her dad, but isn’t saying it. Xander learns they chatted but Florence was cagey when she asked why her father left. Zoe puzzles over Florence saying she was sorry when she brought up Catalina.