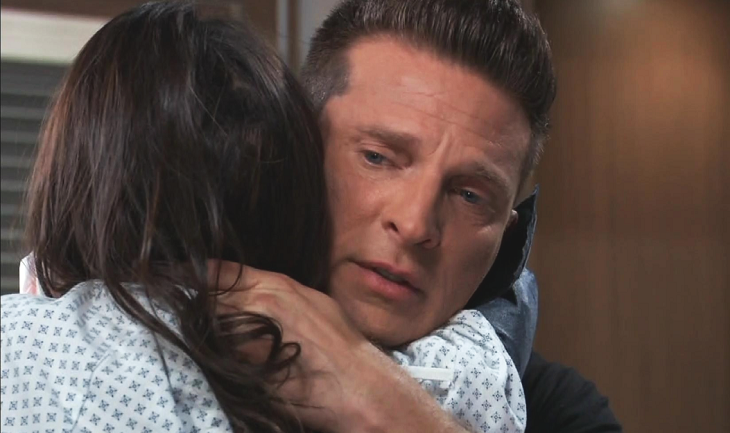 Margaux asks how she is supposed to know where he is. Margaux blames Sonny for getting wrapped up in Dawn of Day. She tells Sonny he took both her parents from her. Margaux says Shiloh is sweet and caring. Sonny tells Margaux that Shiloh wants the D.A. in his back pocket.

General Hospital Spoilers – Shoot To Kill Order Is Called Off

General Hospital’s Laura Webber (Genie Frances) calls Lulu Falconeri (Emme Rylan) and tells her Ryan Chamberlain (Jon Lindstrom) is back in town. Lulu tries to question Harrison Chase (Josh Swickard) who is on the phone. Curtis Ashford (Donnell Turner) finds Laura and tells her about Jordan Ashford’s (Briana Nicole Henry) cardiac issue and tells her Ryan has to be brought in alive.

Curtis explains to Laura that Kevin can’t donate to Jordan because of his prediabetic condition. Laura promises to call off the shoot to kill order. Laura tells Curtis that Ava is their only lead and she will call Chase. Lucy Coe (Lynn Herring) arrives and tells Laura that the cops are looking for Ava. Lucy tells Laura and Curtis about Ava’s cabin on the mountain, and they start to head to the cabin.

General Hospital’s Lulu tries to question Harrison Chase (Josh Swickard) who is on the phone. Chase calls Julian Jerome (William DeVry) for a location on Ava Jerome (Maura West). Chase has a lead, but it doesn’t pan out. Lulu wants to put out an APB on Ryan; Chase tells Lulu it would cause a panic. Laura calls Chase and tells him not to kill Ryan but give Chase the location of the cabin. Laura starts to follow, and Lucy stops her. She reminds Lucy that she is married to Kevin. Lulu wants to know why Laura thinks Ryan would cooperate unless he had something to gain. Lulu sympathizes with Ava. Chase calls Laura and says Ryan is being arrested as they speak. 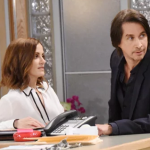 General Hospital’s Ava points a gun at Ryan who says she doesn’t want to shoot him. Ava has wanted to do this since Ryan killed her daughter. Ava gives a warning shot toward Ryan. She tells Ryan she lied to him. She has been waiting to get justice for her daughter since the night on the bridge. Ryan tells Ava their bond is too strong. Ava tells Ryan she will give him time to hurt as she does. Ava wants Ryan to tell her about Kiki Jerome’s (Hayley Erin) last minutes.

Ryan tells Ava he tried to make Kiki’s death painless. He says he tried to take Griffin Monroe (Matt Cohen) out too. Ryan tells Ava that Kiki was scared and tried to get away. Ryan says Kiki called out for her mommy. Ava wants Ryan to suffer and thinks a gut shot should kill him slowly. Ryan is shocked that Ava truly wants him dead. Ava tells Ryan that Kevin is so much smarter than he is. Kevin knew exactly how to set Ryan up.

Curtis comes in and asks Ava not to shoot Ryan. He tells Ava they have to keep Ryan alive. Curtis talks Ava into giving him the gun. Chase and other officers arrive and arrest Ryan. Chase starts out the door with Ryan who tells Ava she loves him and couldn’t kill him. Ava grabs Ryan’s knife and stabs him in the back.

General Hospital’s Shiloh has Sam McCall (Kelly Monaco) at the lighthouse and starts undressing. Sam is saying no, but Shiloh doesn’t listen. Jason Morgan (Steve Burton) arrives and pull Shiloh away from Sam throwing him down the lighthouse stairs. Sam doesn’t feel well. Jason tells her he will get her some help. Jason gets Sam to the hospital and tells her that Shiloh had taken her to the lighthouse. Sam wants to know how Jason found her. Jason tells Sam he remembered what Shiloh said about showing her a new dawn from the tower.

Sam cries as she remembers part of what happened. Sam tells Jason she could barely breathe. She asks Jason what happened to Shiloh, Jason says he threw him down the stairs. Sam asks if Shiloh is dead, Jason says with any luck. Sonny gets to the hospital and checks in with Jason. Jason doesn’t know if revenge was worth this. Sam dreams about Shiloh’s hands on her. Sonny goes into Shiloh’s room and tells him to remember his philosophy. Sonny orders Shiloh to give up Kristina Corinthos-Davis’ (Lexi Ainsworth) pledge; someone will be there in the morning. Sam wakes up from the nightmare, Jason assures her he is there.

General Hospital’s Brad Cooper (Parry Shen) arrives at Julian and tells him that Shiloh is the baby’s father. Brad tells Julian that Shiloh found out at the nurse’s ball and is looking for the baby. Brad tells Julian that Willow thinks the baby is hers. He says Willow will lead Shiloh right to the baby. Brad offers to tell Shiloh the truth and see if he would back off. Julian tells Brad that Shiloh suspects that Wiley is his. Brad begs Julian to tell him what to do. Julian sends Brad home promising not to let Shiloh take the baby.