General Hospital spoilers for Monday, July 1 tease another exciting day of drama for the fans as the residents of Port Charles share their hopes, dreams, fears, and tears!  First, Mayor Laura Webber (Genie Francis) talks with her old friend Robert Scorpio (Tristan Rogers) and tells him an urgent request; she tells him, “Find my daughter’s husband!”

Dante Falconeri’s (Dominic Zamprogna) has been gone too long, even if it was for treatment; and Robert’s the one who drafted him into the WSB in the first place, so Robert needs to bring him home!

Meanwhile, Maxie Jones (Kirsten Storms) talks with Dante’s wife and Laura’s daughter Lulu Falconeri (Emme Rylan) and they are probably talking about the same situation as Laura and Robert; Maxie thought she knew where Dante was when she overheard Robert’s phone call in a recent episode of General Hospital, but maybe he’s been moved! Maxie tells Lulu this is terrible!

At the Port Charles Police Department, Detective Harrison Chase (Josh Swickard) is talking about another terrible situation to Robert’s brother, acting Police Commissioner Mac Scorpio (John J. York). He tells him, emotionally, about the plight of his girlfriend Willow Tait (Katelyn MacMullen) and her baby she put up for adoption; Chase tells Robert that Willow is desperate to keep that child, Wiley Cooper-Jones (Eric and Theodore) aka Jonah Corinthos, away from Shiloh Archer (Coby Ryan McLaughlin)! 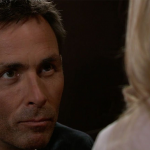 Of course, no one currently in Port Charles except Brad Cooper (Parry Shen) knows the original Wiley is dead and the child they have is Jonah!

General Hospital Spoilers– Shiloh Knows Where His Son Is

Elsewhere, Brad has Wiley in his arms and is talking to Michael Corinthos (Chad Duell); Brad is very worried about the whole Shiloh situation and says his days of keeping Wiley will be easier said than done! Little does he know that Shiloh has put all the pieces together and knows – or thinks he knows – that Wiley is “his son”.

Kim needs Shiloh's help… but they aren't exactly on the same page. Where will this conversation lead? @TamaraBraun
Tune into an emotional, new #GH – STARTING NOW on ABC! @cobyryan74 pic.twitter.com/t7c9RkPEDk

Meanwhile, Shiloh is on the phone with someone, possibly his lawyer and tells them he knows where his son is! Meanwhile, Sam McCall (Kelly Monaco) and Jason Morgan (Steve Burton) are talking about things and Sam tells Jason to leave something up to her! Is she talking about the Wiley situation too?

Days Of Our Lives News: Nadia Bjorlin Is Headed To Another Soap