General Hospital spoilers tease that Dr. Kevin Collins (Jon Lindstrom) may have a long, hard road ahead of him as he faces the fallout from his psychotic twin Ryan Chamberlain’s (Jon Lindstrom) latest murder and mayhem spree.

This may not be the last of it, either. Ryan’s body has not been found. As General Hospital viewers know, if there’s nobody, the character will usually be back!

The latest indignity, although Dr. Collins feels it’s at least partially deserved, is being charged as an accomplice in Ryan’s crimes. It’s doubtful this charge will stick, but an accessory to murder after the fact or aiding and abetting might. Although harboring a fugitive is probably closer to what Kevin did, by not letting the authorities know Ryan was alive.

WATCH: Mike lends Dante a shoulder to lean on (and to get out the things he hasn't dared say out loud). @MaxGail @dom_zamprogna #GH55 pic.twitter.com/9bQwuoEney

However, Ryan has never declared a fugitive, because he was presumed dead. DA Margaux Dawson (Elizabeth Hendrickson) is probably doing what most district attorneys would do. She is charging Kevin with the highest possible charge she thinks she can get away with. Then even if the judge doesn’t go for it, she can move for lower charges so at least maybe she’ll get something that works and she can win at. 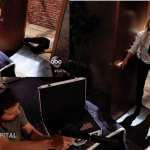 Even then, things could be a little murky according to the law in Kevin’s case. According to the website definitions.uslegal.com, this is the federal statute on harboring a fugitive and what is required to be able to prosecute a person for it.

According to this statute, there are several loopholes the defense could bring up in Kevin’s case. There was no federal warrant issued for his arrest because Ryan was presumed dead. Since there was no warrant, Kevin could not have known of one. However, points 3 and 4 would be valid.

These charges could only be filed for Ryan’s previous crime spree, and he was presumed and probably declared dead as well. General Hospital historical recaps do not specify if Kevin ever had Ryan declared officially dead after the fun-house explosion or if there were any outstanding warrants.

Margaux can’t apply any current warrants to this definition of law, because Kevin only knew and hid Ryan after the first crime spree over twenty-five years ago happened. She can’t combine points from two different instances. All four points have to apply.

So will Kevin be convicted, or will the charges be dropped because of these legal loopholes? It’s all up to the judge. Stay tuned to General Hospital and keep checking General Hospital spoilers frequently to see what happens!

Days Of Our Lives Spoilers: Sarah Livid When She Hears About Brady’s Ultimatum To Eric