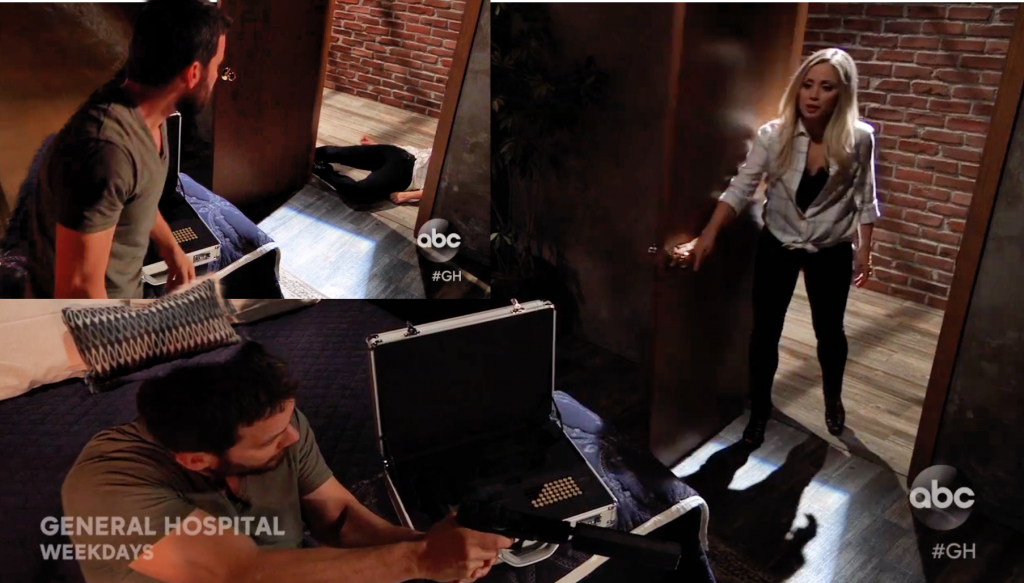 General Hospital spoilers tease that Dante Falconeri (Dominic Zamprogna) has either been brainwashed in his time away with the WSB mission to take down Raj Patel (Noshir Dalal) or else he has a serious case of PTSD (Post Traumatic Stress Disorder)!

In a new General Hospital promo video, Dante is back presumably in Turkey, putting a heavy duty gun with silencer together. He says to himself repeatedly, “I will complete the mission” several times, and Lulu Falconeri (Emme Rylan) comes into the room in real life, obviously sees him pointing his gun, and shouts at him, “Dante! What are you doing?!” Then at the end of the video, Dante fires the gun and Lulu falls backwards to the floor! Will Dante really shoot Lulu, or will he miss? Lulu could just have fallen backwards trying to duck the bullet, since there is no blood in the scene!

GH Spoilers: Did Dante Have A PTSD Episode?

Dante is obviously somewhere else in another situation in Turkey in his mind, and is having a PTSD flashback. PTSD, or Post Traumatic Stress Disorder, first became part of the public consciousness when Vietnam veterans started experiencing symptoms and more studies were done on them, Holocaust survivors, and survivors of other types of trauma, and the American Psychological Association, or APA, added it to the psychological and psychiatric diagnostic book of the time, the DSM – III, as a recognized psychological/psychiatric disorder.

However, it has existed for many years, many veterans of the two world wars referring to it as “shell shock”. A flashback for a PTSD sufferer is similar to an Alzheimer’s episode, such as when Dante’s grandfather Mike Corbin (Max Gail) thinks he’s in high school and that Yvonne Godfrey (Janet Hubert) is his high school sweetheart. It is real to him, and based on a past reality, but it is not what is happening in the present. For a PTSD sufferer, however, it is like living a nightmare!

Since Lulu is mentioned in other spoilers down the road and later in the week, it’s not likely he actually shoots her, and even the gunshot may be in his mind. He may shoot at her, or just be pointing the gun, and Lulu may have to try to bring him back to reality.

Dante's homecoming isn't what he or Lulu expected it to be. Tune into an emotional, new #GH – STARTING NOW on ABC! @dom_zamprogna #GH55 pic.twitter.com/1LgkIXDEvw

Bold And The Beautiful Spoilers: Quinn And Flo Get Chummy, Sally Feels Insecure – Will She Lose Wyatt