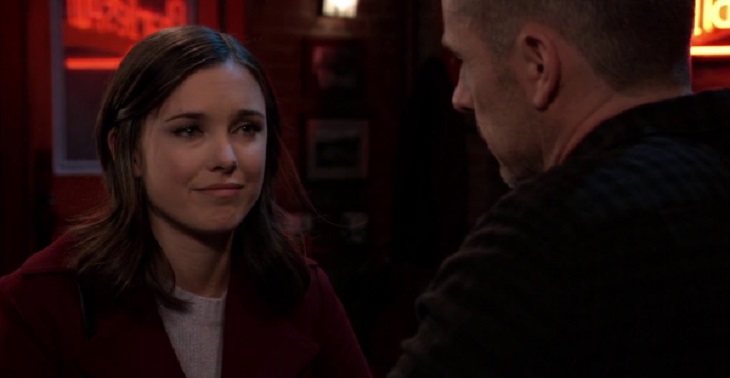 General Hospital spoilers tease that Julian Jerome (William DeVry) is suspicious of Willow Tait’s (Katelyn MacMullen) motives. She already reminded him in a recent General Hospital episode that her looking at the adoption file and contacting her wasn’t exactly legal, and now she wants to be more involved in Wiley Cooper-Jones’ (twins Eric and Theodore) life.

Willow doesn’t know that her son died and that Wiley is really Jonah Corinthos, Michael Corinthos’ (Chad Duell) child. Julian no doubt has noticed that Willow is getting more and more chummy with Michael, and although she doesn’t know the whole truth, and neither does Michael, Michael is still Lucas Jones’ (Ryan Carnes) nephew and spends a lot of time with little Wiley.  Julian may suspect that Willow is using her friendship with Michael to get closer to the baby!

General Hospital Spoilers – Julian And Brad Should Be Worried

This puts Julian, and Brad Cooper (Parry Shen) on dangerous ground; as if Nelle Benson (Chloe Lanier) wasn’t enough of a threat of the truth coming out. However, General Hospital spoilers show Liesl Obrecht (Kathleen Gati) seems to have successfully leveraged Nelle into keeping her mouth shut where baby Jonah is concerned for the time being.

Still, should Liesl herself need to use that information she herself could be an eventual threat to the secrets coming out! The problem Julian and Brad have is that the closer Willow and Michael get, the more chance there is of them comparing notes and Willow realizing Michael’s supposedly dead baby is actually the one that Lucas and Brad adopted, and that her’s is actually the dead baby!

General Hospital Spoilers – Willow May Snap When Truth Comes Out

Willow may seem calm, sweet, and mild-mannered on General Hospital, but the knowledge that her child actually did die may put her over the edge! She already regrets her decision to adopt him out! Then there’s Michael. He’s known to have a bad temper at times and take revenge!

Is Willow really using her friendship with Michael on General Hospital to get closer to the baby? Will Julian and Brad be found out? Stay tuned to GH and keep checking General Hospital spoilers frequently to see how this story evolves!