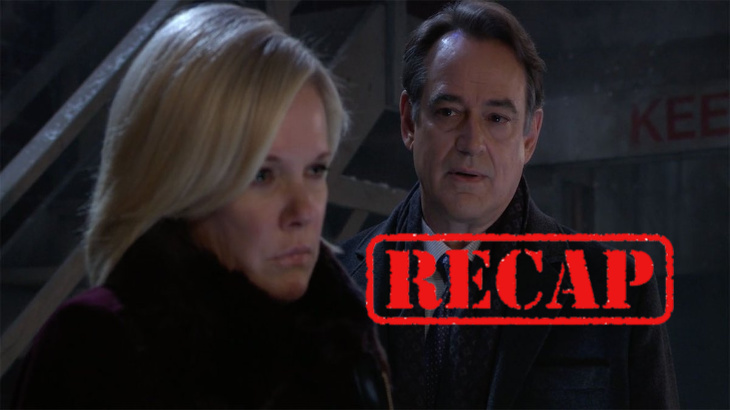 General Hospital (GH) recap for Friday, January 11, 2019 reveals, Anna (Finola Hughes) is with Peter (Wes Ramsey) and gets a very back headache. Anna tells Peter she needs a doctor and stands up, Anna collapses in Peter’s arms. Peter asks Anna if she is ok.

Anna tells Peter she can’t see, she needs a doctor. Anna tells Peter she needs Finn (Michael Easton); he tells Anna to put her arm around him and heads to the hospital with her. Peter gets Anna to the hospital, Finn meets her there. Finn gets Anna into a room, and Griffin (Matt Cohen) comes in and orders tests. Peter stays with Anna while Finn and Griffin order tests. Anna thanks Peter for being there and he says he is glad he could help. Finn asks Griffin if his mind is on his work.

Finn needs to know that Griffin can help Anna. Peter helps Anna into the wheelchair, and she tells him it is ok to go home, she knows he is busy. Peter offers to stay, but she tells him someone will be in touch with him. Finn tells Griffin that Anna is going to want answers. Griffin tells Finn he needs to start thinking like a doctor. Finn tells Griffin he is thinking like the man who loves the patient. Finn tells Griffin his bedside manner sucks. Sonny calls to Griffin and tries to give him his necklace back. Griffin ignores Sonny and says he has a patient. Griffin comes in and tells Anna she had suffered a hemorrhage. Griffin says there is a laser procedure, but they can’t promise it will work.

WATCH: Anna puts on a brave face while Griffin struggles to have faith his friend will ever see again. @finolahughes @mattcohen4real @wesramsey #GH55 pic.twitter.com/KzF5Rope6J

Nina says Valentin showed her it was safe to love him again. Liesl (Kathleen Gati) shows up at Nina’s office. Liesl wants to speak to Nina alone. Valentin wants to stay because they have no secrets. Liesl asks Valentin if he wants to tell Nina what they are keeping from her or if he wants her to tell her.

General Hospital’s Drew (Billy Miller) shows up at the hospital to see Kim (Tamara Braun). Drew brings Kim a cup of coffee and Kim talks to him about why she chose to be an O.B. Drew tells Kim they still have hope but Kim says she is running out. Kim tells Drew the first thing you learn in medical school is that you will lose patients, everything fails at some point.

Kim's overwhelmed, West Coast. Can Drew help put her mind at ease with everything Oscar's going through? #GH is brand-new and STARTS NOW on ABC! @TamaraBraun #GH55 pic.twitter.com/JUBtVc8i8z

Kim tells Drew that Oscar (Garren Stitt) is at that point, medicine has failed him. Sonny (Maurice Benard) offers Kim and Drew any help he can give them and tells them his resources are at their disposal. Sonny tells Kim and Drew he knows a doctor that could get unapproved medication into the country. Drew and Kim tell Sonny there is no miracle drug out there that would help Oscar. Sonny apologizes and hopes he didn’t say anything to make matters worse. Sonny tells Drew and Kim there are in his prayers. Drew tells Sonny he appreciates Sonny being there for them. Sonny tells Drew he is there for anything he needs all Drew has to do is ask.

General Hospital’s Sonny and Griffin meet in the hospital chapel. Sonny says he’s there to say a prayer for Drew’s son. Griffin tells Sonny he hopes the man upstairs listens to him. Griffin says Kiki (ex-Hayley Erin) is still dead and the killer is still out there. Sonny starts to talk about how great Kiki was, and Griffin stops him. Griffin tells Sonny it just makes him mad to realize that Kiki lost that beautiful life. Sonny tells Griffin that he is the one who helped when Morgan (ex-Bryan Craig) died. Griffin tells Sonny his words were a lie and faith is an illusion. Sonny tells Griffin that he understands his faith is shaken.

Griffin's faith is broken and he's not sure if it'll ever go back to the way it was. Tune into an emotional, new #GH – STARTING NOW on ABC! @mattcohen4real pic.twitter.com/1ePs3FYi7w

GH Ava Looks For The Killer

General Hospital’s Ava (Maura West) is on the docks, Franco (Roger Howarth) comes up behind, and she points a gun at him. Franco offers to stay with Ava on the docks. Ava pushes Franco to leave; she tells Franco she is making herself a target for Kiki’s killer. Franco tells Ava she’s not the right type of target. Franco tells Ava she is a kindred spirit and just as lethal as the killer.

Franco explains a killer won’t go after someone who might kill them first. Ryan (Jon Lindstrom) comes upon Ava and Franco on the docks. Franco tells Ryan what Ava is up to on the pier. Franco also mentions not being able to get in touch with him. Ryan tells Franco it is type they stop seeing each other professionally. Ryan tells Franco he isn’t progressing in his therapy and he will gladly make a referral for him. Franco breaks into Ryans office and starts going through his files.

General Hospital Ryan Wants Ava To Leave Town With Him

General Hospital’s Ryan is using Kevin’s (Jon Lindstrom) credit card and looking at a resort website. Ryan takes out Peyton’s license and puts them in a chest with his other trophies and his list. Ava asks Ryan if he is sure he should stop seeing Franco. Ryan tells Ava it is for the best. Ryan tells Ava that the killer feeds on fear. Ryan wants Ava to leave town with him forever.

General Hospital’s Liesl shows up and wants a job at General Hospital. Finn tells Liesl he thought she had lost her license. Liesl says Finn isn’t in charge of who can be at the hospital. Finn points out that Monica is in charge and won’t want her there. Liesl says she is too good for them and will go to Mercy where she will be appreciated. Liesl tells Nina that Valentin has offered her a job at Cassidine Industries. Valentin tells Nina that Liesl needs gainful employment the sooner, the better.

Liesl and Nina talk about how much she needs a job. Liesl tells Nina she knows there are two sides of Valentin. Nina tells Liesl she tried to end it with Valentin. Liesl demands to know how moving in with Valentin is taking it low. Nina wants Liesl to meet Sasha (Sophie Mattsson). Nina talks about how much Sasha looks like Britt (Kelly Thiebaud) and Nathan (ex Ryan Paevey), Liesl says she is nothing like her son. Nina tells Liesl she understands why she doesn’t want to hear about her daughter. Liesl tells Nina there is something she must tell her.

Obrecht's throwing a wrench into Valentin's rekindled romance with Nina. How much longer will the truth about Sasha remain a secret? #GH55#GH is brand-new and STARTS NOW on ABC! @japastu @TheRealStafford pic.twitter.com/fTfobfja6R

Meanwhile, General Hospital’s Peter calls Valentin to meet him and tells him about Anna’s blindness. Peter tells Valentin not to approach Anna. Peter warns Valentin that Liesl will use what she has on him and will use it sooner or later.