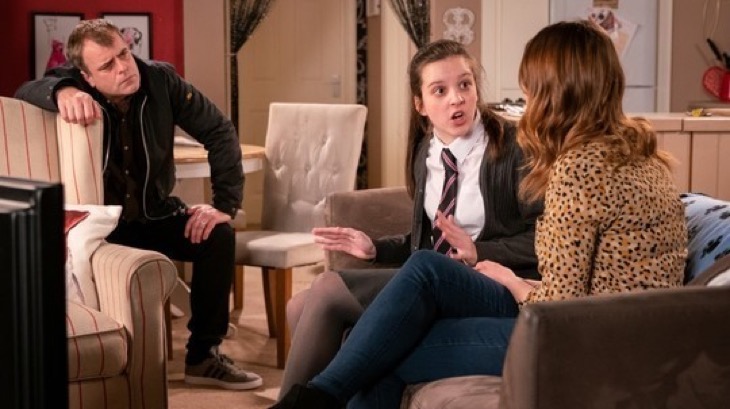 It didn’t take very long for Steve McDonald and Tracy Barlow to figure out that their teenage daughter is expecting a baby. After all, they have strong parental intuition, especially when it comes to their children and their shenanigans. In upcoming Coronation Street episodes, Amy will tell her grandmother Liz McDonald (Beverley Callard) about her secret pregnancy before she reluctantly shares the news with her parents, who will without a doubt have a few things to say about it!

But here’s the thing: Amy doesn’t know who the father of her baby is. Even though she did get up close and personal with someone at a party before Christmas, she doesn’t know who the father is. Yet, Tracy soon finds out that her daughter has not been telling the truth about her pregnancy. She discovers that her timeline is wrong when she attends a family planning clinic with Amy and hears that she’s actually ten weeks along in her pregnancy.

Jumping to conclusions, Steve believes that Simon is most likely the father of Amy’s baby. As a matter of fact, Tracy also believes that it’s true, especially after she reads some suspicious text messages from him on Amy’s phone. That’s when they head over to the Barlow’s home and accuse Simon of getting their daughter pregnant. He denies it, but both Tracy and Steve believe that he’s clearly hiding to something.

Coronation Street Spoilers: Sally’s Nightmare Behind Bars Is Over?

If that weren’t enough, there’s also a possibility that Dev Alahan’s (Jimmi Harkishin) son Aadi Alahan (Zennon Ditchett) could be the father, too. Of course, fans will have to tune in to find out what will happen next! Coronation Street airs weeknights on the ITV network. Check your local listings for times.

In the meantime, don’t forget to check back with Soap Opera Spy for all the latest news, updates and spoilers on Coronation Street and all of your favorite daytime television shows right here!