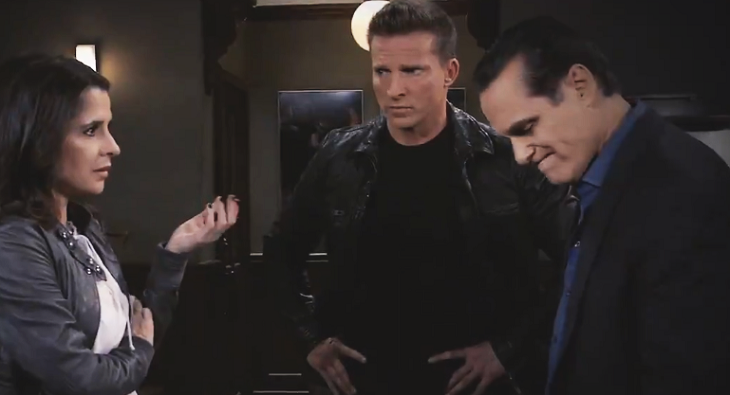 General Hospital spoilers tease that Jason Morgan (Steve Burton) will have to act quickly to come up with a rescue plan for Kristina Corinthos-Davis (Lexi Ainsworth) that will work.

As General Hospital viewers know, Kristina has dug herself deeper and deeper into Shiloh Archer’s (Coby Ryan McLaughlin) spider hole. She is rapidly becoming irretrievably tangled in his web. Soon Kristina may be past the point of no return, and beyond any help that her family can give her, if an intervention is not done quickly.

GH viewers also know Kristina’s family and friends are quickly becoming more and more worried. They wonder what the once innocent looking Dawn of Day really is behind the sweet and kind front. And they also wonder what Kristina has gotten herself into.

Her sister Sam McCall (Kelly Monaco) will have found some very questionable and bizarre trappings in the attic of the Port Charles Dawn of Day house. This is where very few followers have had access. It’s where the full initiation into the inner circle – the circle of trust, as it is called by Shiloh – is done.

Hey #GH fans,
Why do you think Jax comes back to Port Charles? Find out right here ⬇️⬇️⬇️https://t.co/MjqXxe5ufT

When Jason and Kristina’s father, Sonny Corinthos (Maurice Benard) hear about what Sam saw there, they will want to put an end to Kristina’s initiation before it has a chance to start. But will they be too late?

Even if Jason and Sonny manage to break into the Dawn of Day attic to try to stop the processes and procedures, Kristina will not come with them willingly. She has been way too indoctrinated. Shiloh also has a huge ace in the hole legally with DA Margaux Dawson (Elizabeth Hendrickson) as a disciple.

Shiloh could have Jason and Sonny arrested easily. Even the Port Charles Police Department will have no legal standing to investigate anything concerning Shiloh or the cult or be able to get any search warrants.

He more than likely put Margaux on fast track indoctrination. She may even be already in the circle of trust. Clearly, a district attorney has enough money to go through all the classes and levels up the ladder quickly.