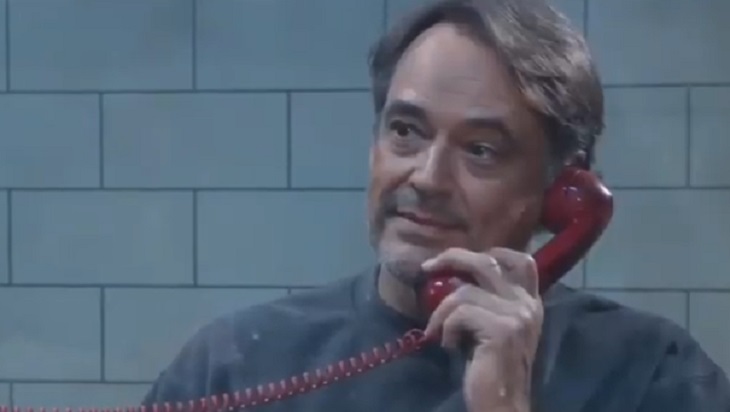 General Hospital spoilers for Friday, July 19 promise another exciting day of drama and tense situations for General Hospital viewers as one Port Charles couple visit someone in prison, and others talk about someone who should be there!

First, we see Curtis and Jordan Ashford (Donnell Turner, Briana Nicole Henry) visiting a scruffy looking Ryan Chamberlain (Jon Lindstrom) in Pentonville Prison. Curtis doesn’t mince words when he warns Ryan that he doesn’t know what Curtis is capable of. General Hospital viewers have to wonder what Curtis and Jordan are even doing there visiting a fully recovered Ryan; is it visitation day for Ryan and Jordan’s separated “twins”?

Next, a remorseful and guilty Nina Reeves (Cynthia Watros) tells someone that she owes them an apology; more than likely that will be Willow Tait (Katelyn MacMullen). General Hospital viewers will recall from Thursday’s General Hospital episode that after Nina bared her soul and shed tears to her Aunt Liesl Obrecht (Kathleen Gati) in her hospital room at GH, Nina felt very badly that she was probably the reason that the evil Shiloh Archer (Coby Ryan McLaughlin) suspected that Wiley Cooper-Jones (Eric and Theodore Olson) was his son!

General Hospital #GH Rumor: Will Nelle Kidnap Jonah And Go On The Run With Ryan? https://t.co/nw6wWPvtJt

Nina tried to apologize to her when she had applied to the position of Charlotte Cassadine’s (Scarlett Hernandez) nanny, but Willow walked away from the job interview and out of the Metro Court before Nina had a chance, so Nina has likely followed her to finish the conversation.

Elizabeth Baldwin (Rebecca Herbst) talks to her half-sister Hayden Barnes (Rebecca Budig) and appears to be asking a favor of Hayden, namely if she could bring someone along on something she and Hayden are planning.

Elizabeth asks Hayden if she would mind if “he” comes along. Of course, as General Hospital viewers know, the most likely “he” would be her husband Franco Baldwin (Roger Howarth) although it could be any of Liz’s three sons, Cameron Webber (William Lipton), Jake Webber (Hudson West), or Aiden Webber (Jason David), with little Aiden being the most likely. It’s doubtful they are talking about Dr. Hamilton Finn (Michael Easton)!

Kristina Corinthos-Davis (Lexi Ainsworth) appears to be at work in Charlie’s Pub when someone that probably shouldn’t be there approaches her. It quite possibly could be Shiloh, as it looks like he may be out on bail! She warns the person that she IS going to make whoever it is pay! That sounds like it is definitely Shiloh she is giving her warning to!

At Pentonville Prison, Willow is visiting her mother Lorraine Miller (Inga Cadranel), formerly known as “Harmony”. She seems to be giving a warning as well as she talks about not allowing someone to be manipulated again; if Shiloh is indeed out on bail, she may also be warning her not to let herself be manipulated again!

Shiloh seems to be the most talked about person in Port Charles, as Drew Cain (Billy Miller) is also talking about Shiloh to his twin Jason Morgan (Steve Burton), asking him “what if Shiloh finds a way to reconnect with me”? Is Drew talking about Shiloh reconnecting with him about his memories?

Shiloh is definitely out of jail, and approaches a shocked and wary looking Mayor Laura Webber (Genie Francis) and he says she can be assured that he is not going anywhere! What makes Shiloh so sure about that? Somebody might be preparing Shiloh an all-expense paid trip to the Pine Barrens!

Bold And The Beautiful Comings And Goings: Joe Cicero Returns As Vincent