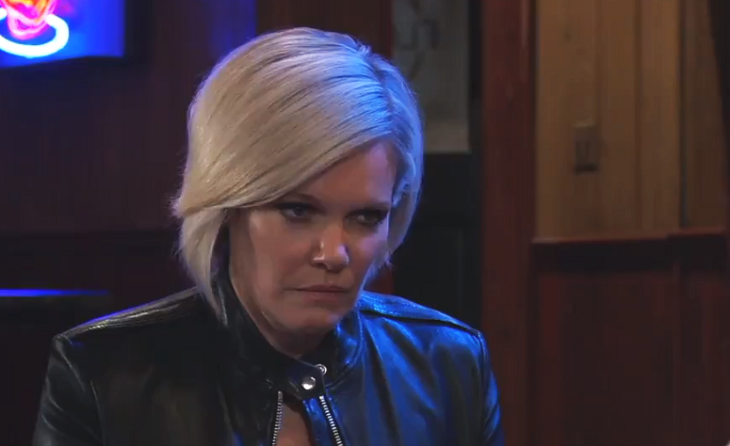 “General Hospital” spoilers for Friday, April 12, tease that Robert Scorpio (Tristan Rogers) will try to talk Anna Devane (Finola Hughes) off the ledge. He’ll sense that she’s troubled, so she’ll open up about her fears regarding Robin Scorpio-Drake (Kimberly McCullough). Robert will insist that Robin must be Anna’s biological daughter. He’ll think Anna’s nuts if she believes anything else, but she’ll still battle concerns.

Of course, Anna probably has the wrong idea here. She should really be taking a closer look at her memories of Peter August (Wes Ramsey). Meanwhile, Valentin Cassadine (James Patrick Stuart) will clash with Spencer Cassadine (Nicolas Bechtel) again. When the topic of the tampered election comes up, Valentin will insist that the truth always comes out in the end.

GH fans know Valentin is keeping a huge secret as well, so he should really stop bothering Spencer and deal with his own problems! Valentine’s fake daughter lie is getting worse and worse, but he’ll hold out hope that he can keep Nina Reeves (Michelle Stafford) in the dark. Speaking of Nina, she’ll get a visit from a friend on Friday. Curtis Ashford (Donnell Turner) will open up and get some support from Nina.

Jordan Ashford’s (Briana Nicole Henry) health is fading fast, so Curtis won’t know how long she can last without a new kidney. She needs one sooner rather than later, but Nina won’t want Curtis to give up. Jordan is a fighter and things always work out for GH characters who are sticking around. Although the commissioner’s condition will continue to decline, better days are in her future.

For now, “General Hospital” spoilers say Jordan will tackle Ava Jerome’s (Maura West) questions. Ava will want to know if Jordan thinks Ryan Chamberlain (Jon Lindstrom) is dead. They were both pretty convinced of his survival already, but they should be even more convinced thanks to Jordan’s latest evidence.

The forensics team discovered the timing of when Ryan’s hand was severed. It happened when he was alive, not deceased. Once Ava hears that she should become even more determined to take Ryan down. Meanwhile, Laura Webber (Genie Francis) will ask for Dr. Hamilton Finn’s (Michael Easton) opinion on the situation. She’ll wonder if Finn thinks Ryan could’ve survived his ordeal.

Finn won’t be able to say for sure, but he may point out that Ryan’s a resourceful guy. After everything Ryan pulled during his reign of terror, Finn probably won’t think Laura should let her guard down.

Over with Margaux Dawson (Elizabeth Hendrickson), she’ll find herself confused about something. Margaux will demand an explanation, so she’ll definitely be riled up and ready to blow.

Finally, Nora Buchanan (Hillary B. Smith) will want Dr. Kevin Collins (Jon Lindstrom) to understand an important distinction. She’ll contend that guilt and responsibility are two different concepts, so Kevin needs to keep that in mind. Kevin shouldn’t be thrown behind bars for the actions of his dead twin brother. The doc shouldn’t have kept secrets, but Ryan’s the one who inflicted all the bloody damage.

‘Bold And The Beautiful’ Spoilers Friday, April 12: Justin Has Difficult Time With Bill – Flo Ready To Tell Hope The Truth