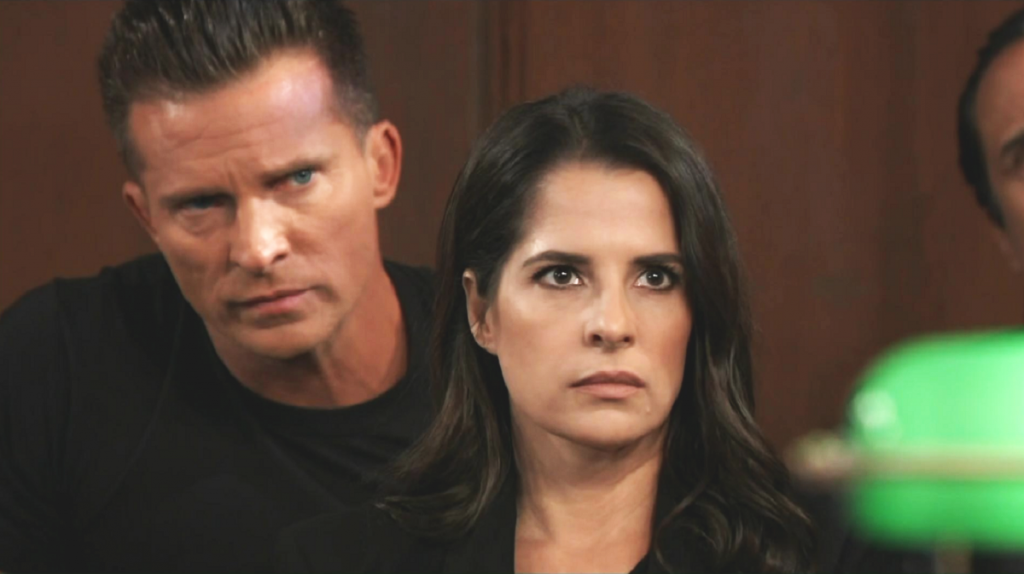 General Hospital (GH) spoilers tease Jasam fans may have their couple but they are certainly unrecognizable. What has happened to Jasam and will they ever return?

General Hospital has featured the mob for decades, starting with Frank Smith in Luke and Laura’s hay day. Jason Morgan (Steve Burton) has been in the mob for decades. Jason would never walk past someone threatening himself or anyone else, especially Sam McCall (Kelly Monaco) without making sure he was dead or restrained.

An amateur would not turn their back on an opponent without checking their pulse. Are we really expected to believe that Jason and Sam would walk away from the man who just tried to attack her? Give us some reality please, this would not have happened.

General Hospital Spoilers – Who Would Overlook A Police Uniform?

Honestly, General Hospital’s Shiloh Archer (Coby Ryan McLaughlin) is running from a hit-man and Peter August (Wes Ramsey). Shiloh knows the cops will shoot to kill after he escaped custody. He was in full uniform yet the possibility of a bulletproof vest doesn’t enter Jason or Sam’s mind?

This is far from their first rodeo. Sam and Jason have dealt with much worse. Manny Ruiz (Robert LaSardo) made Shiloh look like a choir boy. Jason would have made sure this guy was dead.

Sam would have tied him up or restrained him somehow. One of them would have checked for a vest, you don’t have to be a mob enforcer to know he had one.

General Hospital’s Sam has been kidnapped by Shiloh. Sam has rescued both Dev Corbin (Ashton Arbab) and Wiley Cooper-Jones (Theo and Erik Olson) and been attacked by this man.

Shiloh was getting ready to rape Sam when Jason came onto the boat and shot him. Shiloh is literally trying to kill Jason and Sam takes him down. How do we go from self-defense to murder?

Is Sam expected to let this guy kill Jason? Sam did not target Shiloh, he went after her. He has done nothing out of line with this guy. Sam shoots the man with the only thing she has available to save the man she loves. Instead of praise for saving three lives, we get murder charges? This would never happen if it were anyone else, why is Sam being charged with murder?

General Hospital’s Shiloh has wreaked havoc on Port Charles for months now. Shiloh has raped numerous women. He has extorted money. Shiloh has targeted Sam and Kristina. Shiloh has kidnapped more than one person. Sam has been personally attacked by this man at least three times. It is time for this to end.

The bad guy is not supposed to always win. Something needs to change and Shiloh needs to be a bad afterthought, not a lasting presence after his death. This guy needs to go and be forgotten.

This story would have been much better if Jason had planted Shiloh in the pine barrens months ago. The storyline is nothing short of atrocious. Please stop the insanity and give us back the characters we know and love. Stay tuned to General Hospital and keep checking General Hospital spoilers frequently for all the latest news, updates and developments!