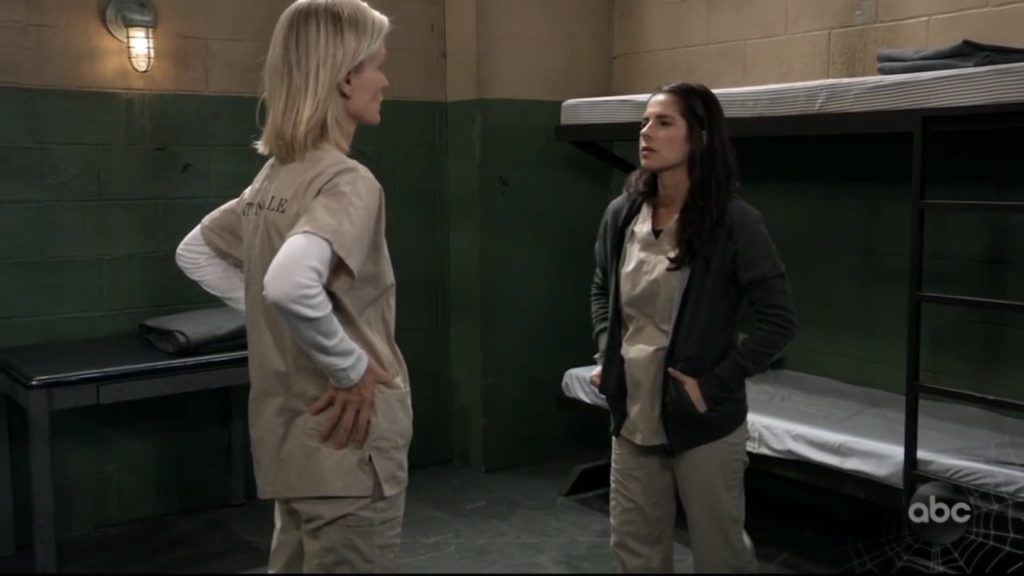 General Hospital spoilers tease that Cassandra Pierce (Jessica Tuck) will be worried and scared in upcoming episodes of GH!

Cassandra Pierce is still in Pentonville Prison, but she is worried and scared after she made threats to the wrong person, and now she finds out just how scary prison justice can be! In the womens’ side of the prison, someone got their eye put out, while in the mens’ side of the prison, someone was stabbed to death using only an ink pen! Just on her side of the prison alone, Nelle Benson, (Chloe Lanier) even though she seemed like she was nothing to be afraid of, is best buddies with Ryan Chamberlain, (Jon Lindstrom) a serial killer over on the men’s side, who was the one who stabbed his cellmate with an ink pen! On her side of the prison she also has to contend with Samantha McCall (Kelly Monaco) awaiting her bench trial, and her significant other, Jason Morgan (Steve Burton) could easily sneak into Pentonville to mete out prison justice in disguise, although Nelle, Sam or even Jason is not what’s worrying her; it’s Ryan! She got in someone’s face who knows him, and now she’s afraid she has a target on her back!

Cassandra has heard of Ryan Chamberlain – not only his most current reign of terror, but through friends in the DVX she heard he was an assassin for them for many years, and didn’t need any training to do it other than some spy skills. He was already pretty good at hiding his murderous trails, but the DVX training made him even better! Prison guards seem to be pretty lax in Pentonville, with no protection for an inmate who should have, as Sam, been held in the Port Charles Police Department jail for trial. Ryan hasn’t even gotten his trial yet – Cassandra heard how people back in Port Charles, his twin brother for one – pulled some kind of scam to get one of his kidneys to put in the police commissioner and then was put straight into Pentonville without even a trial!

Men and women are in all the common areas together and there doesn’t appear to be any solitary confinement areas for the bad boys and girls! Regular inmates appear have no protection from one another! There are constant lockdowns where men and women are in a common area and have to stay put where they are until the lockdown is over, and she is constantly fearful she will be alone with Ryan Chamberlain, who even with one hand could strangle her to death; there’s always the trusty wrestling move, the neck lock! In that move, the arm is used to strangle or to break someone’s neck when it’s used to murder someone! Cassandra knows she would be no match for Ryan!

Days of Our Lives Spoilers: Kristen Blurts Out Shocking Revelation to Eric – Learns Sarah is Pregnant