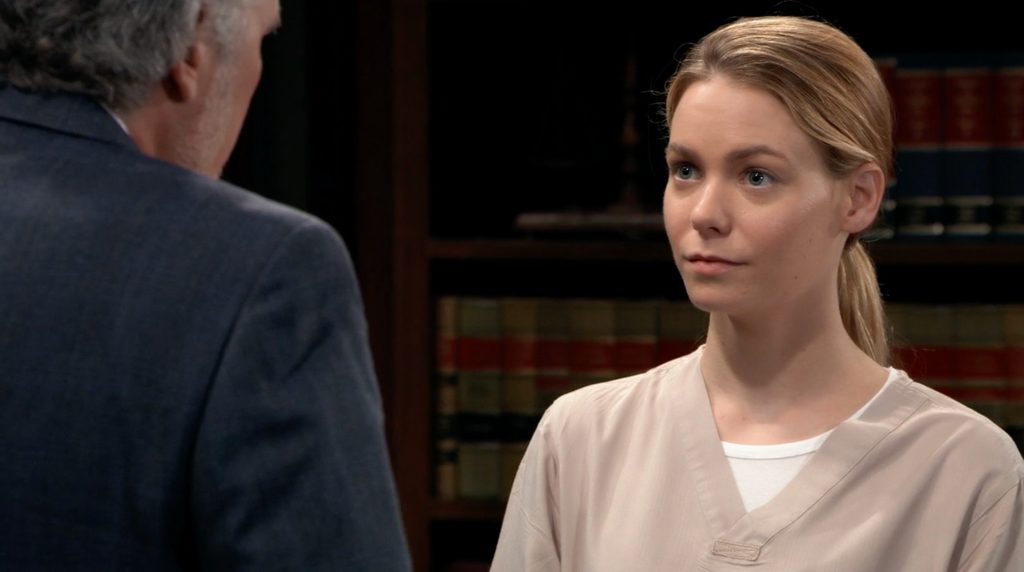 Welcome to your Wednesday October 16th General Hospital (GH) recap! We begin our day at the apartment of Harrison Chase (Josh Swickard) where he is on the phone with Jordan Ashford (Brianne Nicole Henry) in just a towel after a shower.

At Charlie’s Pub, Alexis Davis (Nancy Lee Grahn) complains to Julian Jerome (William DeVry) that her life coach is trying to kill her. Julian mentions that someone is trying to do a smear campaign against him still owning the bar.

At the Courthouse, Nelle Benson (Chloe Lanier) is excited to see Brad Cooper (Parry Shen) who is going to testify at her parole hearing. Michael Corinthos (Chad Duell) come sin and Nelle confesses the entire baby Jonah scheme. Next thing we know Brad wakes up – it’s a nightmare.

At Kelly’s Diner, Maxie Jones (Kirsten Storms) and Lulu Spencer (Emme Rylan) are surprised to see Michael and Sasha out in public. Lulu can’t believe they are still together as Maxie tells her that he is not judgmental. Maxie and Lulu are shocked to see Nina and Valentin together.

Lulu asks Maxie to go to Nina and tell her what she overheard, but she refuses and wants to stay out of it. Lulu can’t believe Sasha was arrested and Valentin gets away with murder. Maxie and Lulu banter with each other , disagreeing over who the real guilty person is.

At the courthouse, Nelle Benson (Chloe Lanier) is waiting for the hearing to start when her lawyer Martin Gray (Michael E Knight) walks in. He asks if she is ready and she assures him she will be out of Pentonville by the evening.

Martin says it’s a miracle she is even getting a hearing after being accused of attempted murder. He cautions her that she may not win the hearing today, but she still needs to be nice and sweet. The parole board walks in and as Chase and Brad look on.

In his bed, Brad Cooper (Parry Shen) wakes up from the nightmare and his husband Lucas Jones (Ryan Carmes) wonders what is wrong. Lucas questions what he was dreaming about and why he mentioned Michael’s name. Lucas thinks that he seems more stressed than ever.

Lucas finds out that Brad has been going to therapy and taking anxiety medicine. Lucas leaves and goes to see his dad at Charlie’s Pub.

At Charlie’s Pub, the personal trainer for Alexis Davis (Nancy Lee Grahn) walks in and asks if she has been taking her supplement. Alexis says she had her GP take a look at the ingredients of the shake. She says her sleep is better and her energy has increased dramatically.

Also at Kelly’s Diner, Sasha Gilmore (Sofia Mattsson) and Michael Corinthos (Chad Duell) are discussing the fallout from her paternity lies. Sasha says she wants to repair the damage that was done.

Harrison Chase (Josh Swickard) walks I and tells Sasha to stand up – she’s being arrested for fraud. At the police station, Michael defends Sasha and her background story of doing the gig for money. Sasha says she does not blame anyone but herself, but Michal thinks she should throw Valentin under the bus.

At Kelly’s Diner, Valentin Cassadine (James Patrick Stuart) is telling Nina Reeves (Cynthia Watros) how beautiful she is and how happy he is that she came back. Nina realizes Sasha and Lulu are in the same room as her. They watch as Sasha is arrested and Valentin wonders if Nina is the one who had it done.
Nina says that Sasha broke her heart and she wants her to pay.

Martin Gray tells the parole board that she has been a perfect inmate. She has a chance to talk and apologizes for all the mistake and suffering she has caused.

Alexis tells Sasha that she did criminal impersonation in order to get money and she says Michael must leave the room. Nina has arrived and Alexis tries to convince her to drop charges and just sue Sasha.

Maxie and Lulu continue to argue about the secret and Lulu brings up Maxie’s fake surrogate scheme from a few years ago.

Alexis’s trainer Kendra goes to her brothers grave and tells him it’s time to get their revenge. Nelle is told by the parole board that her release has been denied.

Michael runs into Valentin and tells him he will go down too, if Sasha goes down ……flash to preview

Days of Our Lives Spoilers: Eric And Nicole’s Future Jeopardized By Xander Cook?