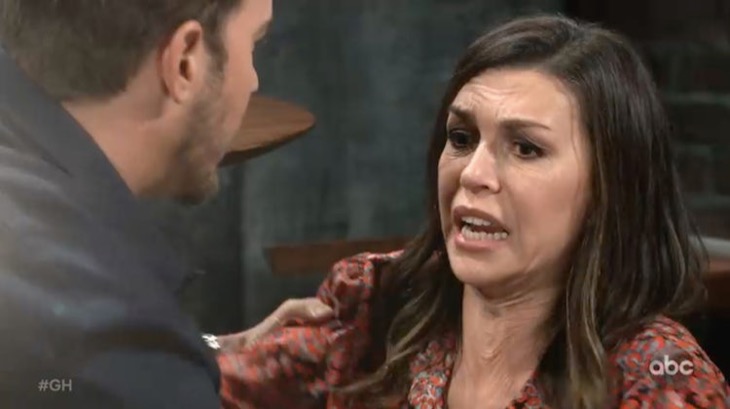 General Hospital spoilers tease that Anna Devane’s (Finola Hughes) a sudden headache and blindness may not be from a natural disease process! General Hospital viewers will note that Anna felt fine after coming from her routine phlebotomy, which is something she has to have done on a regular basis as part of her disease management protocol.

Finn (Michael Easton) even checked with her and asked her was she having any headaches or weakness afterward, and she said no. Then, during a meeting with Peter August, (Wes Ramsey) she became weak, started having a severe headache, and passed out! Of course, Peter immediately called 911!

Anna will be rushed into surgery to correct the blindness after Dr. Griffin Munro (Matt Cohen) runs some tests, and they will reveal a rare infectious disease, which will be a surprising outcome, since where Anna could have contracted it is a mystery. Finn, of course, is an infectious disease specialist and so will be deeply involved in her treatment protocol. The blindness will be corrected, but the mystery will remain as to how Anna contracted the infection. General Hospital spoilers also say that the cause will affect various people unrelated to her or to the hospital!

Other General Hospital spoilers say that the subject of who kidnapped Cassandra Pierce (Jessica Tuck) will hover over Port Charles; could that individual, an as yet unrevealed dark Cassadine be behind an attack on Anna and tampered with the phlebotomy equipment on purpose and introduced the infectious agent? Could it possibly Cassandra herself, now working with those who kidnapped and held her hostage?

There was a mention of Cassandra and the Canadian clinic recently when Finn and Anna talked about events of the past year that they were involved in together! It’s possible that Anna’s big health scare may lead to a new Cassandra and Cassadine story. Stay tuned to GH and keep watching General Hospital spoilers to see this dramatic storyline as it evolves!

Young and the Restless Weekly Spoilers January 14 to 18: Billy Out For Revenge, Catches Cane and Vicky – Nick Furious, Someone Tormenting Nikki