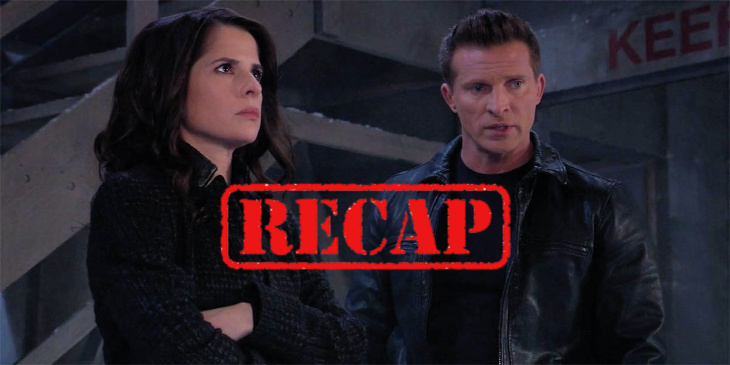 Liz (Rebecca Herbst) shows up and joins everyone there. Liz tells Laura about Cameron (William Lipton) having to go to court for trying to buy pot. The TV announcer says they can now declare a winner. Laura is declared the next mayor of Port Charles. Everyone hugs Laura and congratulates her. Ryan (Jon Lindstrom) toasts her with a beer. Ryan is holding Peyton’s (John Patrick Jordan) license, Laura comes up and asks him what he is doing. Laura tells him he is sending her mixed messages.

Ryan says he told her before the election and he means it more now, he will support her any way he can. Ned (Wally Kurth) arrives and offers to help with the transition any way he can. Ned thanks Olivia (Lisa LoCicero) for coming to the Floating Rib with her. Olivia is looking forward to new challenges. Olivia tells Ned they have their life back, they can now go to soccer games, sleep in on Saturdays, and so on the vacations they couldn’t before.

General Hospital’s Mac (John J. York) calls Ryan and tells him they need to talk about his brother. Mac offers to meet him somewhere else. Ryan says he will come to Mac. Mac tells Ryan that the cops have discovered that Ryan and the serial killer both kept the victim’s licenses.

Mac turns to "Kevin" for help understanding Ryan's copycat, West Coast. But how will the killer use the insight? A brand-new #GH STARTS NOW on ABC! pic.twitter.com/n4ZwS9ZdqA

Ryan tells Mac that Ryan kept the driver’s licenses to prove that he is staying one step ahead of the cops as well as a record of names and addresses. Mac and Maxie (Kirsten Storms) talk at the Floating Rib; he asks her if Peter (Wes Ramsey) is still camping outside her door. Maxie tells Mac that Peter isn’t his father.

General Hospital’s Olivia and Ned turn the election returns back on; he says no matter what happens he’s fine as long as Olivia is with him. Michael (Chad Duell) and Monica (Leslie Charleston) join them in the living room. Ned says Michael wants him to win, so he has no reason to come back to ELQ. Monica tells Ned that Drew said to let him know that he had time to vote. Monica mentions Gail’s (Susan Brown) will and tells Michael how she wishes he had met Gail.

Monica tells Ned should couldn’t be more proud. Ned says if he has to concede to anyone he is glad it is Laura. Ned is grateful to Olivia for her help with his campaign. Ned tells Olivia he is sorry that she no longer has a job, she reminds him of the Metrocourt. Monica and Michael talk about how it would have been good to celebrate something. Monica gets a text about Gail’s will; the reading is next week.

General Hospital’s Lulu (Emme Rylan) is at home, and Maxie arrives. Maxie wants to know if Lulu is ready. Maxie wants to know what could be more important than Laura’s victory party. Peter shows up and joins them as well. Lulu tells Maxie she and Peter need to talk about business. Peter asks to meet with Anna (Finola Hughes). Peter tells Anna he had a good time at Christmas, but he wants to ask her about the WSB file she gave to him. Peter needs Anna to finish the portrait for him.

Peter wants to know about his whole family. Anna doesn’t want to talk about her twin sister at all. Anna and Peter are talking about the family. Anna gets a headache; Peter asks if she is ok. Anna tells him she had a procedure today and sometimes it can give you a headache and make you dizzy. Anna continues to act stranger and Peter asks her what is wrong. Anna says she needs to see a doctor and collapses on the floor.

General Hospital’s Anna and Finn (Michael Easton) talk about going to Laura’s victory party. Finn shows up at Laura’s party and talks to Alexis (Nancy Lee Grahn). They exchange pleasantries, and she tells him she is rediscovering friendships that mean a lot to him.

"Kevin" is sending Laura mixed messages. But will he prove to be a distraction as the mayoral results pour in? #GH is brand-new and STARTS NOW on ABC! pic.twitter.com/91sx3x5dZh

Lulu finally arrives, the last precinct is about to report in their returns. Laura makes her acceptance speech. Laura can’t promise to avoid making mistakes, but she will put forth 150 % effort to make every one of Port Charles feel safe. Laura vows that the serial killer’s capture is imminent.

General Hospital’s Sam (Kelly Monaco) and Jason (Steve Burton) meet on the pier. Sam can’t believe that Jason still comes down there. Jason says yes they have a lot of bad memories there. Sam says its time to make some happy ones, but she doubts it will be tonight. Hank (Coby Ryan McLaughlin) and says he needs their help and asks them to follow him. A man is lying on the pier in a cardboard box; Sam tries to get him to move. The man gets up and walks away, Hank says Sam is more persuasive than he is.

Hank says Drew saved his life but saved him from his line of work as well and lead to his arrival in Port Charles. Sam accuses Hank of using her alias to torment her. Sam says she is getting emails from her name, Linda Black. Hank tells Sam he isn’t sending them and tells her she didn’t marry his father as Linda Black. Hanks hopes that Sam will eventually see him as a friend. Sam asks Jason how she did. Jason thought Sam was convincing. Sam doesn’t think it is a coincidence that Kristina (Lexi Ainsworth) is in Hank’s orbit. Jason agrees with Sam; it is all connected somehow. Sam asks what Hank is after, Jason says nothing good.

Bold and the Beautiful Recap Thursday, January 10: Taylor Vows To Be There For Reese