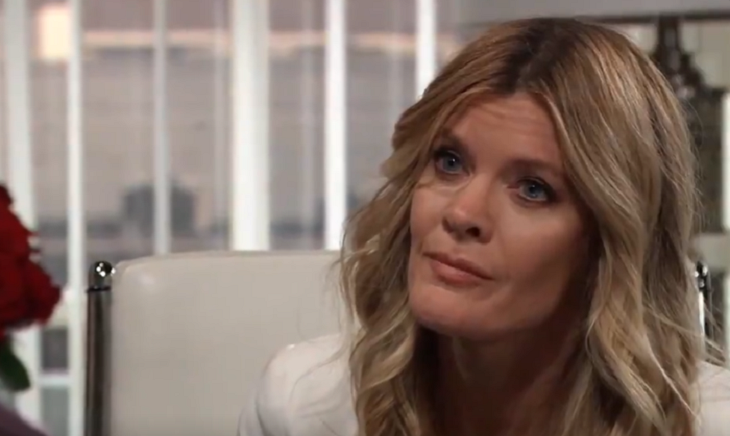 Michael Corinthos (Chad Duell) joins Carly and Carly informs him she has to reschedule because Sonny couldn’t make it. Michael assumes Sonny is with Kristina Corinthos-Davis (Lexi Ainsworth) Carly confirms he is. Carly and Michael walk to the nurse’s station where they meet Jason Morgan (Steve Burton).

Michael is telling Carly that he knows Kristina left DOD last night but wonders where she is. Carly tells Jason that Michael is worried about Kristina. Michael asks Jason if Kristina is OK, Jason tells him yes. He says he got her out before anything happened, but Kristina is pretty messed up. Jason tells Michael that Kristina is mad but messed up. Michael says Kristina will pull out all the stops to get back to Shiloh.

Jason says Sam is going to search the DOD house. Willow calls Michael and wants to meet immediately. Jason tells Carly about the cup he found at the DOD house, Jason wants proof that Shiloh is drugging his followers. He wants to make Shiloh disappear, but he would rather have Shiloh convicted and sent to jail.

Carly tells Jason they are undermining Kristina, Shiloh needs to disappear. Jason is afraid of a complete breakdown from Kristina if Shiloh disappears. Jason brings Carly an orange juice, and she tells him about Oscar’s seizure. Carly tells Jason about the watch and the superstition about 11:11. Carly tells Jason that Oscar has days at best. Jason wants Carly to shoot some pool, and he tells Carly to call when she needs him.

General Hospital’s Sam McCall (Kelly Monaco) joins Shiloh Archer (Coby Ryan McLaughlin) at the Dawn of Day house. Sam comments on how bad Shiloh looks, he says he didn’t get any sleep last night. Sam tells Shiloh no one has heard from Kristina, including her mother and Kristina isn’t answering her phone. Shiloh hasn’t heard from Kristina either.

Sam claims to be worried because no one has heard from Kristina. Shiloh assures Sam that they will find Kristina together. Sam pretends to be worried about Kristina to play into Shiloh’s plan. Sam wants to call the cops, but Shiloh wants to go to the hospital. Shiloh refuses to let Sam search Kristina’s room but Sam rants about what is best for Kristina.

He sends Daisy Kwan (Kelsey Wang) to help search Kristina’s room. Daisy doesn’t know why Kristina left; she knows the consequences of leaving. Sam asks what the consequences of leaving the trust would be. Daisy says Shiloh would never shun anyone, Kristina is special to him. Daisy says Kristina pledged to join the trust. Shiloh returns and tells Sam he thinks Jason kidnapped Kristina.

With Brad investing a lot of his time at DOD, Lucas isn't sold on the program. Will he change his mind? An all-new #GH STARTS NOW on ABC! @RyanCarnes1 pic.twitter.com/z8U42D1XWs

General Hospital’s Brad Cooper (Parry Shen) and Lucas Jones (Ryan Carnes) are at Charlie’, and Brad is reading from Shiloh’s book as Willow walks in the door. Lucas is not impressed with Shiloh’s writings and tells Brad this isn’t his thing. Willow hears Brady trying to talk Lucas into taking their son to some of Shiloh’s classes. Brad and Lucas speak to Willow. He’s surprised to see her since he thought she was moving. Willow recalls Shiloh coming to her room at the school and talking about her breaking a promise to him.

Shiloh runs into Brad at the hospital, and they discuss his classes. He sees the DOD cup and asks where Brad got it. Shiloh tells Brad that Jason is trying to take him down. Brad says the nurse that asked him to run the test is close to Jason. He advises Shiloh to charge Jason with theft. Brad agrees to lie and say he didn’t find anything.

General Hospital’s Valentin Cassidine (James Patrick Stuart) approaches Nora Buchanan (Hillary B. Smith) at the courthouse. Valentin wants Nora’s help and offers to pay whatever price she wants. Nora tries to convince Valentin that his problem is to time-consuming, but he doesn’t want to take no for an answer. Valentin tells Nora this is a family matter and that Lulu has left the country. He wants to amend the custody order. Nora tells Valentin that Lulu cannot reassign her custody to Laura. Valentin wants to file for full legal and physical custody of his daughter. Valentin changes his mind and tells Nora to stop the proceedings.

General Hospital’s Nina Clay (Michelle Stafford) arrives to find Spencer Cassidine (Nicholas Bechtel) in her office and questions why he is there. Nina tells Spencer to get out of her chair, he moves and continues to talk to her. Spencer informs Nina that is how he feels after being exiled from staying on Spoon Island, his rightful home. Nina is sorry that Valentin and Spencer have issues, but Valentin feels entitled to the house as well.

Spencer says he is there to express his concern for Charlotte, Valentin is trying to keep Laura from Charlotte, Nina thinks he misunderstood. Spencer tells Nina she needs to take the blinders off and Valentin has no problem with Laura seeing Charlotte. He tells Nina that Valentin wants to put a stop to Laura wanting to see Charlotte and begs Nina to make Valentin leave him alone. Nina doesn’t believe anything Spencer says.

General Hospital’s Franco Baldwin (Roger Howarth) approaches Cameron Webber (William Lipton) at school and asks if he wants to share what happened, Cameron declines. Franco takes Cameron to the hospital and tells her Cameron got suspended. Liz Webber (Rebecca Herbst) demands an answer, but Cameron says the truth will only hurt her.

Cameron tells Liz the other boy called Aiden Spencer (Jason David) a little fairy boy. Cameron tells Liz that everyone calls Aiden gayden. Liz tells Cameron he knows better than to start fights. Liz says Aiden is different and young; their job is to love and support Aiden. Cameron is upset that he’s not supposed to defend his brother. Cameron loves Aiden and doesn’t want to deal with him being bullied. Liz and Franco accuse Cameron of being upset for himself and not Aiden.

General Hospital’s Michael joins Willow and agrees to talk to Kristina. Willow is afraid she might kill Shiloh if she is too close to him. Willow says Shiloh won’t let go of this so easy; he wants to control the women in DOD. Willow tells Michael that Shiloh doesn’t force himself on the girls and her mother encouraged her to join them.

Michael asks if Willow’s baby was Shiloh’s, she says yes. Willow had to leave to keep the child from being molded into a blind follower. Michael is glad Willow got away, but she lost her baby anyway. Willow tells Michael her baby didn’t die.