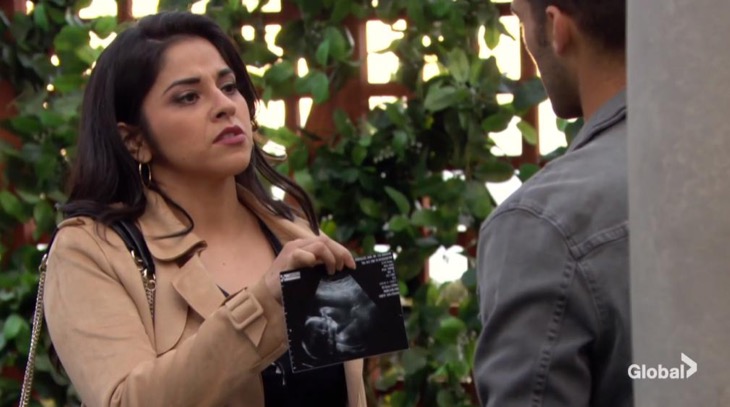 “Young and the Restless” spoilers for Tuesday, April 16, tease that Abby Newman (Melissa Ordway) will try to turn Arturo Rosales (Jason Canela) away. At the new restaurant, Abby doesn’t want to hear Arturo’s excuses and apologies. However, Arturo keeps trying and eventually gets Abby to admit he deserves another shot. Unfortunately, Mia Rosales (Noemi Gonzalez) arrives and ruins the mood.

When Abby can’t get rid of Mia, she tosses Arturo out along with her. Mia gets Arturo alone elsewhere and admits she needs an alibi for the night of Abby’s attack. He puts the clues together and determines that Mia’s to blame for what happened to Lola Rosales (Sasha Calle), so he’s obviously not interested in covering for her.

That’s when Mia admits that she’s pregnant. Arturo doesn’t buy it, but she offers the ultrasound photo as proof. Mia wants to believe Rey Rosales (Jordi Vilasuso) is the baby’s father, but she hints that the math works for Arturo, too. Arturo leaves in a huff before telling Mia what his plans are. 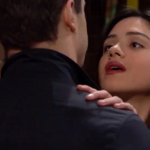 Young And The Restless Spoilers: Phyllis Is Onto Kyle – Summer’s An Adult Should Mom Interfere?

Young and The Restless Spoilers: Paul Williams Suspects Rey Rosales Is Hiding Something

At Crimson Lights, Paul Williams (Doug Davidson) fills Christine Williams (Lauralee Bell) in on his suspicions. He believes Rey knows more than he’s saying, so that’s why he tasked him with solving Lola’s case. Paul’s hoping to learn additional info through his sneaky move.

At Sharon Newman’s (Sharon Case) house, she’s stunned by the news that Mia attacked Lola by mistake. Rey brings up the baby and not wanting it to be born in prison. They also discuss Paul putting him on Lola’s case and worry about the chaos this could bring.

Paul & Rey speaking at the park (a lot of outdoor scenes today).

Rey suggests that maybe Lola was mistaken and she wasn't attacked, but just fell. You can sense Paul isn't buying this.

"I still think we're missing something."

Later, Paul spots Rey talking to Arturo. The brothers agree about making sure the baby is protected, so Rey tells Paul that Arturo backs up Mia’s story. He suggests maybe Lola just fell on the Abbott property, but Paul can’t get behind that idea.

Nikki Newman (Melody Thomas Scott) also corners Paul and asks for help figuring out what Victor Newman (Eric Braeden) is up to in Nevada. Paul declines, so Nikki tries Rey next. She’s willing to pay him if he can solve this mystery for her, so Rey decides he’ll mull it over and get back to her later.

Meanwhile, Kyle Abbott (Michael Mealor) meets up with Lola and admits he hasn’t broken things off with Summer Abbott (Hunter King) yet. Lola frets about Kyle still loving Summer, but he promises Lola is the one he wants. Kyle just wants to figure out a plan that doesn’t involve Summer seeking revenge on them.

"you're a real piece of work…using a fake pregnancy to get me to lie for you."

"does this look fake? believe me now?"

"it still doesn't prove the baby is mine."

Mia says she believes in her heart the baby is Rey's…."I'm 3 months along, you do the math."

He storms off. #YR pic.twitter.com/TdCoQJo40y

Afterward, Kyle sits down for a chat with Summer and reveals that Phyllis Summers (Gina Tognoni) blackmailed Jack Abbott (Peter Bergman). She had her private investigator take photos of Kyle and Lola, so Kyle explains the situation to a furious Summer. The Abbott bride refuses to let her mother or anyone else tear them apart.

“The Young and the Restless” spoilers say the excitement is revving up on the CBS soap. We’ll give you updates as other Y&R details and rumors emerge. Stay tuned to see what’s next in Genoa City.