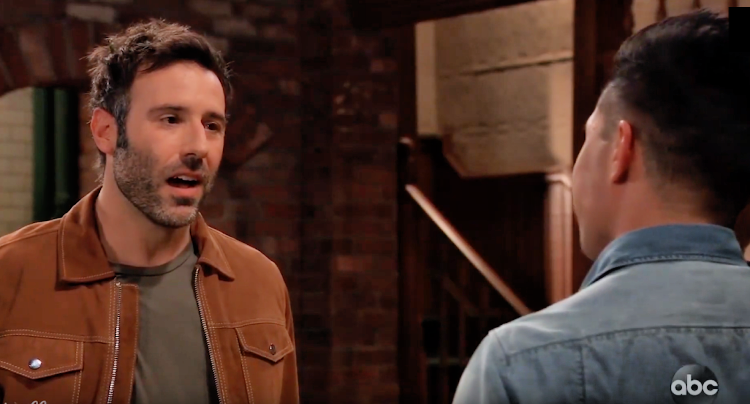 General Hospital spoilers tease that Jason Morgan (Steve Burton) will learn of Brad Cooper’s (Parry Shen) allegiance to Dawn of Day this week on General Hospital. As General Hospital viewers know, Jason retrieved the cup that was used to give Kristina Corinthos-Davis (Lexi Ainsworth) a drugged drink that knocked her out and kept her out till the next morning after Jason extricated her from the attic of the Dawn of Day house.

He then took it to General Hospital and gave it to Elizabeth Baldwin (Rebecca Herbst) to have a toxicology screen done on it, which is a lab test that looks for drugs. Other General Hospital spoilers tease that the test will never be done because Shiloh Archer (Coby Ryan McLaughlin) will either intercept the cup from Brad before he has a chance to test it or tell Brad to fake the results. Shiloh will be in the hospital looking for Kristina and run into Brad with the cup.

When Jason tries to get the results is probably when he will find out about Brad taking classes at Dawn of Day, or he could find out from Michael Corinthos (Chad Duell) who may have heard about it from either Willow Tait (Katelyn MacMullen) or even Lucas Jones (Ryan Carnes). Lucas is probably not in the loop about the dangers at Dawn of Day or he would have made sure Brad did not get involved in it if he even knows at all.

Of course, General Hospital viewers will not be surprised that Shiloh will figure out that Jason “kidnapped” Kristina and this will lead to trouble down the road for Jason; Sam McCall (Kelly Monaco) will have to act as a double agent, so to speak, promising Shiloh help in finding Kristina and promising Jason and her family to keep Shiloh from finding out where she is!

Kristina is about to wake up in a strange place, West Coast. What will she have to say to Jason about her "rescue" from DOD?
An all-new #GH starts RIGHT NOW on ABC! @_lexiainsworth pic.twitter.com/P5B5viOLBQ

Days Of Our Lives Spoilers: Will Eric Steal Sarah Away During Her Wedding To Rex?