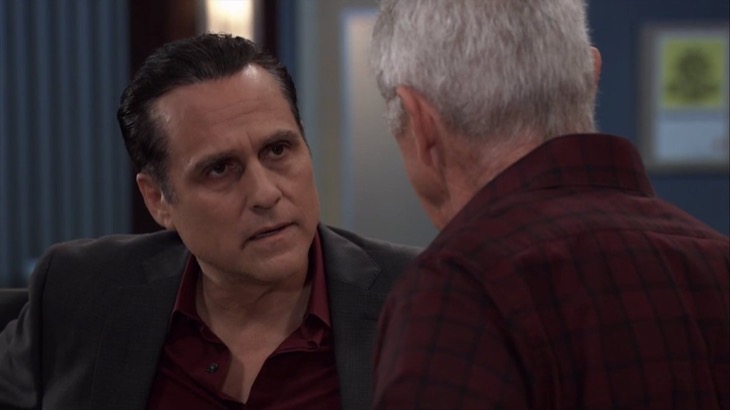 General Hospital rumors tease that Dante Falconeri (Dominic Zamprogna) could be off the grid because he’s been taken captive by Raj Patel (Noshir Dalal) and his men in the vicinity of Ankara, Turkey. Sonny Corinthos (Maurice Benard) will be pulled into a very dangerous situation by trying to rescue Dante and bring him back to Port Charles.

He didn’t like what Robert Scorpio (Tristan Rogers) told him at all in the General Hospital episode of February 21st that the WSB could not bring Dante back, saying they didn’t want to create an international incident and that Dante had gone rogue! But Sonny isn’t about to let his son stay in danger overseas either, and he plans to take action soon!

He will place a call for help in rescuing Dante to his own sources, but where should they start looking? General Hospital has a way of recycling past storylines and changing them up a bit to fit whatever current storyline is going on; the use of Ferncliff being an example. After all, how many times has someone been remanded to Ferncliff in the past few years?

It’s entirely likely that General Hospital writers will have Dante in the same Turkish prison that Duke Lavery (Ian Buchanan) was in for twenty-five years and presumed dead, until Cesar Faison (Anders Hove) found him and then held him captive in the Swiss clinic where General Hospital fans first saw Dr. Liesl Obrecht (Kathleen Gati) working a few years ago!

Robert Scorpio would be well aware of that prison and exactly where it is located, as would Anna Devane (Finola Hughes); so what’s the holdup? Longtime GH viewers may remember Duke’s account of his captivity there, and that it was not a pleasant place to be held at all, and although he didn’t appreciate being put in yet another prison as far as he was concerned, it was much better and cleaner than the one in Turkey! Stay tuned to GH and keep checking General Hospital spoilers frequently to see if Dante will indeed be found in the same place that Duke was held for twenty-five years, and broken out and brought back to Port Charles by Sonny and his men!