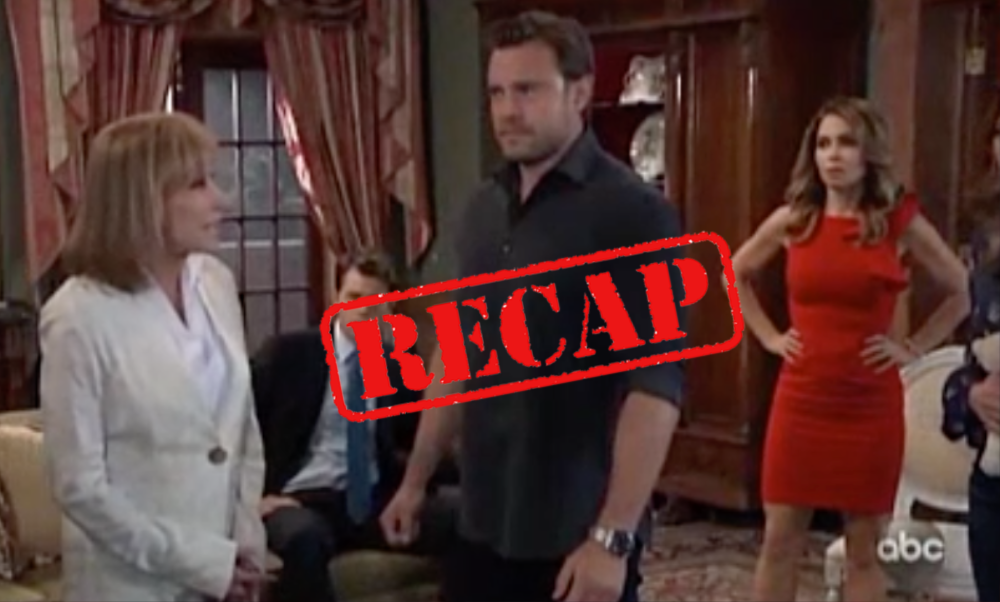 At the PCPD jail, Harrison Chase (Josh Swickard) storms down to the jail cell to see his girlfriend Willow Tait (Katelyn MacMullen). He says it’s not a good day for the justice system.

At the reading of Oscar’s will, Alexis Davis (Nancy Lee Grahn) reveals that he is leaving all his ELQ shares to the man who helped him, Shiloh Archer (Coby Ryan McLaughlin). Everyone gasps and is shocked as Shiloh enters the room. Alexis says that she will fight this part of the will and he calls her an alcoholic.

Shiloh says to Drew Cain (Billy Miller) that maybe this will bring them closer and Drew shoves him onto the ground. The family collectively say they will reject the outcome of the will. Shiloh asks Kim what her thoughts are on all of this. Michael interjects and says that Oscar’s bequest to him is invalid. He actually gave the shares to the Mt. Kilimanjaro fund, not to Dawn of Day.

At the PCPD Jason Morgan (Steve Burton) turns himself in to Mac Scorpio and says he has someone who can help stop Shiloh. In walks a handcuffed Harmony (Inga Cadranel) which surprises everyone. Harmony says her real name is Lorraine Miller, wife of the deceased Douglas Miller.

Robert Scorpio (Tristan Rogers) explains that Jason cannot have coerced her to come, she says she’s been given time to think about Shiloh’s crimes. Harmony says she is willing to tell the truth about everything, including the fact that Sam has been stalked by Shiloh for years. Harmony explains they used money from followers to pay off the police and others in high up places.

At the PCPD jail, Chase tells Willow how much he misses her and that she is amazing. Chase is angry and says he’s tempted to turn in his badge and hire Sonny Corinthos to take care of “business.”

General Hospital Liesl Obrecht is in the hospital

Liesl asks why Hamilton Finn (Michael Easton) is treating her? He says the murky waters of Port Charles could contain harmful bacteria. Liesl tells Franco she is scared someone may try to come and finish her off. Liesl is upset that Franco does not believe she was attacked, so they run through what happened that evening.

Hamilton Chase arrives at GH to take her statement about the attempt on her life.

At General Hospital (GH) Elizabeth questions why Hayden is really there? Finn walks up and Hayden offers him a donut. Finn says that they need to go for a walk and talk. They end up at the Metro Court restaurant and he wants to talk about the baby they lost. Hayden says that she knows that he is engaged to Anna Devane.

Hayden says she’s glad that they both landed on their feet. She invites them to dinner and he says he is not interested.

Elizabeth tells Lucas Spencer (Ryan Carnes) that her son Aiden is doing better and she appreciated his support. She asks if there is something wrong with Wiley and he explains the birth parents are interfering.

Harmony explains the initiation night process and how Callie’s was the night her husband was “killed.” Harmony says her and Shiloh had access to the drug that would be used on the girls. Her lawyer submits a copy of the prescription.

Finn asks Hayden about the letter she left regarding the baby and that she sent another letter asking to meet him in Rome. Hayden says he never came to see her and she moved on with Jax.

Liesl tells Chase that she heard footsteps and a set of hands shoved her off of the ship. They run down a list of guests and she says it must have been Hayden Barnes.

At the jail, Willow sees her mother Harmony who is now sharing a cell across from her. Harmony apologizes for everything that she has done to her and their father.

At General Hospital (Gh) Shiloh has run a paternity test and he tells Lucas that it probably proves Wiley is his baby. …….flash to preview