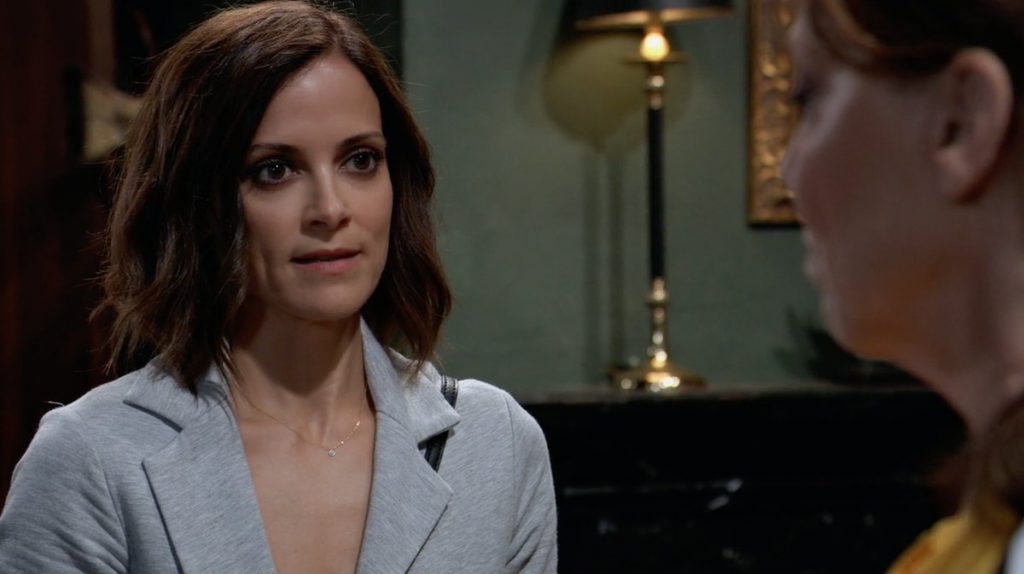 Welcome to your Thursday August 15th General Hospital (GH) recap! We begin our day at Sam McCall’s (Kelly Monaco) penthouse where Robert Scorpio (Tristan Rogers) is explaining the mind mapping procedure that happened. Robert says Franco Baldwin (Roger Howarth) has no revelation of himself and believes he is Drew Cain (Billy Miller).

At General Hospital (GH), Kim Nero (Tamara Braun) is confused by how Franco is acting. He relays some dialogue from Drew’s past and then grabs her in a deep kiss. Kim shoves him away right as Elizabeth Webber (Rebecca Herbst) and Drew Cain (Billy Miller) come around the corner.

In Charlie’s Pub, Julian Jerome (William DeVry) is discussing moving away with Kim to his son Lucas Spencer (Ryan Carnes). Lucas realizes they did not make the decision together. Brad Cooper (Parry Shen) walks in and overhears part of the conversation that Julian is leaving. 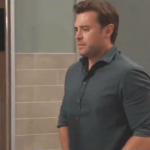 At the Floating Rib, Jasper Jax (Ingo Rademacher) pays for the team’s drinks. At a table, Maxie Jones (Kirsten Storms) asks Peter August (Wes Ramsey) what he discussed with Jax. Peter admits he told him about Liesl Obrecht being smitten by him. Maxie asks them to please be nice to Liesl as she is turning her life around.

At Wyndemere, Liesl Obrecht (Kathleen Gati) catches Hayden Barnes (Rebecca Budig) snooping in Valentin’s office. Hayden lies and says that she is looking for an earring that she lost from the other night. Liesl says they should call Nina to confirm why she is at the house alone. Liesl continues to grill her about her criminal past and how bad this looks for her.

Liesl grabs the phone away from Hayden and sees that Jax is her accomplice. Liesl is confused as to why Jax would work with somebody like her.

Sam wonders if they can reverse the procedure in order to get Franco back to his normal self. Jason explains that there could be a way to reverse it, but Robert says he can either live with Drew memories or become a vegetable.

Kim gets upset and pushes Drew away as Elizabeth goes over to talk to them. Franco tells Kim that he remembers everything about their past life together. Kim tells him that he is Franco Baldwin and not Drew Cain.

Franco takes off to the hospital and goes to the Floating Rib where he orders two whiskeys.

Brad is upset that Julian is leaving town and voices his disappointment. Lucas leaves to go back to the hospital and Brad freaks out about the baby switch.

Liesl threatens to call the police and Hayden says she has something to offer her for her silence. Hayden says if she lets her go, she will get Jax to have dinner with her.

At General Hospital Brad is caught by Lucas manipulating a hospital document and realizes he’s looking at Wiley’s hospital background.

Kim tells Julian what happened with Franco knowing Drew’s memories and it was upsetting. At the Floating Rib, Franco comes face to face with Jason………..flash to preview