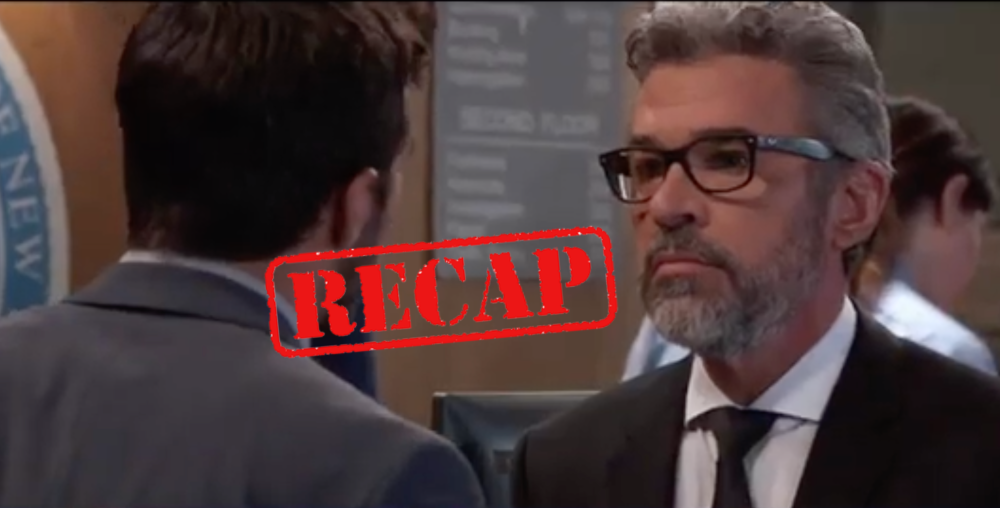 Welcome to your Monday, July 1st General Hospital (GH) recap! We begin our day at Jason’s Morgan (Steve Burton) apartment where he and Sam McCall (Kelly Monaco) have spent the night together.

Outside Charlie’s Pub, Brad Cooper (Parry Shen) runs into Michael Corinthos (Chad Duell). He says hi to baby Wiley and tells him he is going to protect him. We flash to Shiloh Archer (Coby Ryan McLaughlin) on the phone telling someone he knows where his son is.

At the GH Port Charles Police Dept. Harrison Chase (Josh Swickard) brings the interim police commissioner Mac Scorpio, (John York) a cup of coffee. He also brings him his favorite breakfast sandwich and Mac is suspicious of how nice he is being.

Robert Scorpio (Tristan Rogers) meets up with Laura Spencer (Genie Francis) at the Floating Rib. Laura says she needs his help to find Dante Falconeri. Robert tells Laura that his spy work has slowed down and he’s looking for something new to do.

Robert says they need to let Dante heal from the PTSD and brainwashing that happened. General Hospital Laura says she understands and Robert tells her he has his law degree. He secretly went to law school and may be pursuing a new position.

At the Metro Court restaurant, Lulu Falconeri (Emme Rylan), Maxie Jones (Kirsten Storms) and Peter August (Wes Ramsey) are having lunch. Lulu tells them about the “robbery” and that the guy got away. Maxie and Peter say it’s dangerous for her to be living in her house. She could have been hurt during the attempted robbery. Peter and Maxie tell her that this Invader story she’s working on needs to end.
Lulu continues to say she is going to continue to meet dates and find this robber.

At the GH Crimson magazine office, Drew Cain (Billy Miller) is playing with his daughter Scout and they talk about her brother Oscar Nero. Alexis Davis (Nancy Lee Grahn) shows up to pick up her granddaughter and they discuss Scout and Oscar. Alexis says she can’t imagine outliving a child.

Drew says Kim Nero (Tamara Braun) is struggling and very sad, she is worse off than ever. Alexis says there is one more thing they need to do, the reading of Oscar’s will.

GH Recap: Sam McCall and Jason Moran Are At The Safehouse

Sam McCall and Jason Morgan discuss what happened in Beecher’s Corners over breakfast at the safehouse. Jason explains what happened with Carol and the police officers. Sam realizes she overheard Shiloh instructing Jason to be killed.

Jason says he needs to leave and go get Carol, but Sam tells him not to leave – she will go.

Brad tells Michael he is worried about Wiley, but he says the family is there to help them. Shiloh Archer sees Brad and Wiley come into Charlie’s Pub and walks right up to them. Brad accuses him of stalking them as he fawns over Wiley.

Brad tells Shiloh to stop trying to use his Dawn of Day influence over him. Shiloh gets up in his face and tries to help him carry Wiley’s stuff, Brad pushes back. Shiloh asks Brad for parenting advice and says he has no idea about diapers, formula, etc.

Harrison Chase and Mac Scorpio discuss Willow Tait (Katelyn MacMullen) being locked up. They discuss how tough the judge is being and this could be an uphill battle. The cop from Beecher’s Corner who Jason locked up and attacked shows up at the PCPD looking for him.

The cop says Jason had an accomplice, right as Michael Corinthos walks in. The cop says he’s the drunk one that escaped with Jason Morgan.

Officer Price continues to yell at Mac about Michael being involved in Jason escaping. Chase defends Michael and lies, saying that he was with him last night. Mac throws the officer out and asks Michael what really happened, Lulu continues to stand by doing her dating/ robbery story. Maxie and Peter say they need to find Dante as soon as possible.

Laura runs into Mac at the police station and says they need a new DA, Robert suddenly appears and says she is the new DA.

Shiloh tells Brad that he will find out where his baby is and Brad says get the hell out of my way and rushes out. ….flash to preview

“General Hospital” spoilers say another terrific episode’s coming up. We’ll give you updates as other GH news and rumors emerge. General Hospital airs on ABC. As always, more detailed Spoilers and Breaking news will appear here on Hollywood Hiccups!

Bold and The Beautiful Spoilers: Confused Liam Wakes Up In Steffy’s Bed – Thomas’ Plan Works, The End Of ‘Lope’