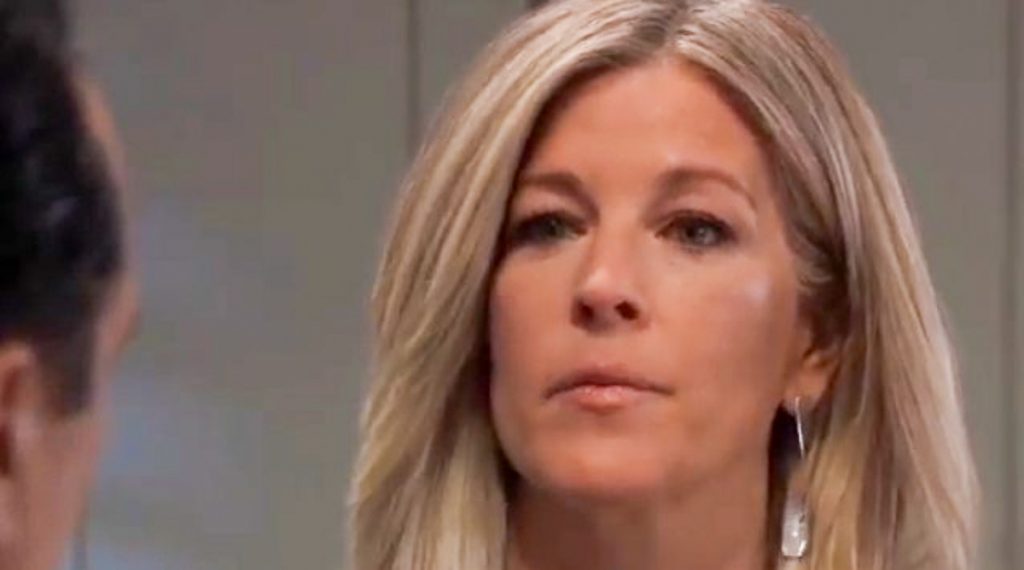 Welcome to your Monday, December 30th General Hospital (GH) recap! We begin our day at the Port Charles pier, where Carly Corinthos (Laura Wright) is meeting up with Jasper Jax (Ingo Rademacher) who is running late. She asks Jax what the plan is with Nikolas Cassadine (Marcus Coloma), Jax says he has disappeared

At the Metro Court restaurant, Curtis Ashford (Donnell Turner) spots Ava Jerome (Maura West) where she seems very upbeat. Ava tells him that 2020 is going to be her year. She calls Nina Reeves (Cynthia Watros) and says she hopes shes ready for the wedding and destruction of Valentin.

At the Corinthos mansion, Sonny Corinthos (Maurice Bernard) is talking to a henchman who trailed Carly’s car to Pier 17 at the waterfront. Jason Morgan (Steve Burton) arrives and wonders what the problem is.

At Turning Woods, where Lucas Jones (Ryan Carnes) is being nursed to health, Sam McCall (Kelly Monaco) runs into Willow Tait (Katelynn Mcmullen.) Sam thanks her for all she has done for the family as her estranged father Julian Jerome (William DeVry) walks into the room.

Sam asks Julian how her brother Lucas is and he says that he may never wake up again. Willow tells Brad Cooper (Parry Shen) that shes sorry she almost let Nell hold him, which shocks Julian. Willow is embarrassed about Nelle, but Sam says its okay as Nelle is crazy and unpredictable.

GH Spoilers – Ava Jerome and Laura Webber have a run-in

At the Metro Court, Ava Jerome (Maura West) literally runs into Laura Webber (Genie Francis) who asks her why she burned Helena’s portrait? Ava swears she had nothing to do with the fire and she is not out to help Valentin Cassadine (James Patrick Stuart).

Ava says karma is going to get Valentin as Curtis and Laura listen. Curtis wonders why Ava would be going to the wedding and she says she hopes to see them both there.

Sonny asks Jason how Christmas was and they discuss Sam coming home. Jason asks about Carly’s whereabouts and says maybe Gio (the henchman) knows? Jason says Sonny and Carly are under a lot of stress, which upsets Sonny more as he snaps at Jason.

Jason thinks that tailing Carly is a bad idea and wonders if this has to do with the Mike situation.

Carly Corinthos (Laura Wright) is dumbfounded that Nikolas has disappeared. Carly wonders when Jax is going to tell the family that Nikolas is alive. She gets upset and Jax hugs her as Sonny’s henchman secretly watches.

Brad comes down to the pier for fresh air and runs into Carly as Jax leaves. Carly comforts Brad as he says this whole thing is Nelle’s fault, which surprises her.

At Wyndemere, Charlotte brings Nina the bouquet flowers for the wedding, which are stunning. Valentin asks Nina what is wrong and he brings up the full custody order that he wants to redo. Nina says he should not waste his time trying to get full custody, they need to focus on the future.

Sam and Willow both get invites to a memorial celebration for Shiloh, which shocks them. Julian walks down to the pier to see Brad and Sonny’s henchman overhears their conversation about Nelle.

Gio (the henchman) shows up at Sonny’s and tells him what he overheard from Brad and Julian. Nina calls the hospital to pick up DNA results which she needs by the wedding.

Laura, Curtis and Jax discuss the possibility that Claudette may be able to help them trap Valentin. Carly comes home and Sony confronts her angrily about where she has been……..flash to preview.

Stay tuned to the show, and keep checking General Hospital spoilers frequently for all the latest news, updates and developments!

The Bold and the Beautiful Star Denise Richards Planning A Huge Move – Is She Leaving Los Angeles?